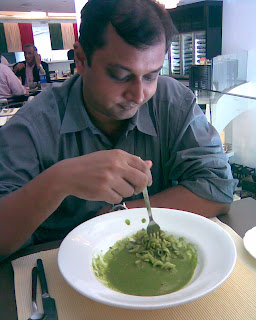 What would you expect when you go to a two storied restaurants with nice black & white classic Hollywood pictures on the wall, funky cutlery, racks of wine bottles, wood & chrome decor, hefty prices and a name like Spaghetti Kitchen? Good continental cuisine? Well you are not wrong then. Spaghetti Kitchen at Phoenix Mills, Mumbai has a nice repertoire of continental food.

But the thing about conti is that people are still discovering it. So one would expect some knowledgeable staff when you go there to eat. At least if you love your food like I do

Unfortunately the staff there comes across as anyone but people who can transport you to the streets of Milan, the fields of Provence or sunny Barcelona. Especially if you are not someone who just points at an item on the menu card and says 'I want that'.

Let me tell you what happened when the wife took me to lunch there last week.

I wanted to have a penne pesto. I'd discovered penne at the old Da Vinci (when it was beside Mc Craig's at Pali Naka, Bandra). That's when I first started liking pasta. Since then I have had pesto at various places at Bombay - Maybe, Out of the Blue, the new Da vinci (besides Hasmukhbhai's DVD store) and even Spaghetti Kitchen. What used to surprise me was that each time it would be a different shade of green...and was coming dangerously to the white cheesy sauce which used to put me off pasta to start with.
That's when I came across Jamie Oliver's cook book (which the wife gifted me on my birthday) and the recipe of pesto (basil & bit of garlic pounded together, blended with a 'bit' of cheese & dollops of olive oil). I promptly went down the road to the Pali Market...picked up the ingredients, some prawns and made what I think was quite a decent pesto pasta. and that's when it struck me that where restaurants got it wrong...they added too much cream! And the solution was simple... ask them to put less cream because it should not be there in the first place.

OK as the wife and her copywriter buddies would say, 'cut to Spaghetti Kitchen'. The lunch order was being taken by gentlemen who wore badges which said 'captain'...and boy were they as clueless as our last cricket captain (yes, yes, that's the Bong in me speaking).

What I ordered was this: penne pesto, with olives & mushrooms (cholesterol u know hence the veggies) AND MINIMAL CREAM. All of which was dutifully written down by the 'captain'.

What I got was penne swimming in a light green sauce (minimal cream?) and no mushrooms or olives.
So I sent it back and asked for the olives & mushrooms to be put in...which were charged extra in any case. It was 1.50 PM then and boy was I hungry...the pasta came back with the toppings and was ice cold. I remembered an old Italian saying about pasta, 'you can wait for pasta but never make pasta wait for you'. I asked the captain to heat it and get it. By then I had been identified as a difficult customer and each time a fresh 'captain' would come with the next version.

Anyway the heated version came which was swimming in a light green bilge straight out of the Exorcist. What happened to the 'cream at a minimum' bit.

It was 2.30 by then well past my lunch time. So I quietly ate up...went home and made penne pesto with chopped chicken sausages for dinner the way it is meant to be. ow that's what I call a fine dining experience.

PS I wouldn't pay much heed to the rumours that the wife bribed the chefs in Spaghetti Kitchen to lighten up things to put me off vegetarian pasta.
Conti Mumbai lows