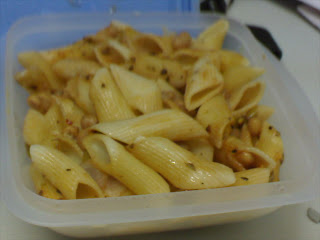 I just had a very tasty lunch at work!
A rare experience over the last ten years or so...and I have tried various options over the years. My first office at good old Cal was a nice experience where we got good Bong home like food. I stopped getting lunch from home unlike in college where I used to get it and go to the library and eat it (so that I could eat it).
But the canteens at both my offices at Bombay have been quite deplorable. Its almost as if they are run by food anarchists...cold food, unappetising with the dal, curd, subzi getting mixed into one soggy mass, the cutlery stinks and looks dirty too and the smelly canteen guy often puts it down with a flourish on the desk and coughs on it!
I've never worked at a place which has a separate canteen area. So one has to sit at one's work station and eat which is just too messy.
Over the years I have tried various options. Primarily the famed dabbas of Bombay including fairly expensive 'health dabbas'. The biggest problem with dabba food is that it gets ice cold by the time one eats it and then doesn't taste good (some offices have microwaves but not mine). Which is a bit painful when you are paying upwards of 90 bucks. The second problem is that the dabba comes in various containers and opening them and putting them on the table often leads to disaster. So I have rarely continued with a dabba for long.
The good thing when I worked at Nariman Point was that there were lot of eating options for people downstairs (the dossa guy at Chandramukhi, the pao bhaji guy, Rajesh's juice, Air India Kerala thali) but I now work in a desolate area at central Bombay with very little options. Plus at Nariman Point one had the sea to look at...here slums and roads which double as loos. So going out is not an option.
So how did I have a good lunch today? Sick with horrible lunches at work and my current need to have a higher proprtion of vegetarian food because of the damned cholesterol levels I decided to make my own stuff...confident the food I make would taste fairly good even if cold...and at least one can get clean containers and cutlery. Must admit that my fellow sufferers at the Bombaybongs community at Orkut had recommended this to me earlier much earlier.
Last night I boiled some penne and then tossed it in the micro with chopped pickled olive, canned baked beand, oregano, chilly flakes, half a spoon of cheese spread, chopped chillies & tabasco. I have put a picture of that here.Tasted quite good even though cold. Before this I had got a cabbage bhaaji (Bengali badhakopir torkari) once and paneer sauted with capsicum and pepper, ordered rotis from office and had it along with it. The food tastes much better, is much cleaner as I get it in containers from home versus the smelly stainless steel plates here. I hope I can keep this going. Last night I made raajma while the wife made bhindi. I kept a bit of both for lunch tomorrow.
Normally all this vegetarian stuff would put me off but I have a trip to Cal coming up so want to keep myself primed for the rolls, biryani, phuchkas, mudighontos, kalias and bhetki a la dianas. In fact our maid is unused to this in our house. Yesterday morning I took out the remaining cabbage to get to office. She promptly junked it in the bin as she could not imagine me taking vegetables to office and thought I had kept it out to be thrown.
By the way don't get me started on office coffees which are too sweet, too milky and often served in cups which are too smelly. In fact I have seen this in most offices which don't have vending machines. If I need a coffee in the morning I pick it up Candies on the way (with the free cookies) or at the CCD at the wife's office complex...and at meetings I just don't have coffee
PS The best work lunch experiences that I have had was when the wife was the girl friend and we used to go out for lunch every day from our office much to, I am sure the mirth of others. We have had lovely times at the Sunshine cafe (Kashmiri pulao daal), Leopolds (prawn fried rice & beef chilly), Oberoi Shopping arcade (sandwiches), Status occasionally (reshmi paratha), Churchgate JATC (chicken salami sandwich). By the way I used to do most of the eating as the girlfriend who is now the wife skipped lunch those days...its another thing that we were broke by the time we got married after that daily eating out...now we try to meet on Friday to do Friday lunches....those are great too
Food musings