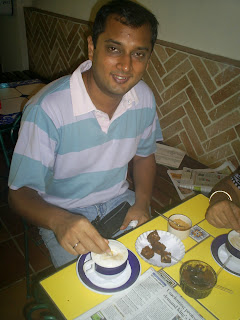 In case you have read any of my earlier posts and think that I am a bit of a sour puss, let me tell you it's not that. Its just that I care about food and get mighty upset when people are callous about it.
Anyway today I am going to write about a 'happy place'. By happy place I mean a place which makes me happy...happy as a child (as the child like meter of the last couple of lines show ).
This happy place is Candies. Specifically the Candies at Bandra Reclamation (they have another branch near Ambedkar Rd).
You would always find me with a happy smile when I am here.
While one knew vaguely about this place the person who really recommended Candies to the wife and me was Uncle. He was not technically our uncle but that's how we referred to him. We met him in 2003 when we bought our house from him. We have spent lot of evenings with uncle since then over the last few years (though I must admit not as much as I now wish we had). Normally whenever, we met him he would then take us somewhere or the other to eat(his club at Khar, the late lamented FBI, Tangy Tamarind, Surmai, sandwich wallah at Carter road or he would order from Jai Hind) . In fact as he used to say, 'we should meet to eat'. Ironically while he recommended Candies to us, we have only once been there with him.
It's difficult to pin point a single thing which makes me happy about Candies but there is a nice buzz about the place.
It's primarily what one calls a Mac place after the Catholics of Bandra...but the food goes well beyond the basic east Indial sorpotel, prawn curry rice or beef chops. Its a deli which has sandwiches, pastries, milk shakes, ice teas, puffs, patties, chops, biryani, East Indian roasts, lasagnas, samosas, breads, chilly chicken & fried rice ..you get the drift. The nice thing about Candies is that they have kept updating themselves with the changing tastes of Bandra and have introduced healthy options such as brown bread sandwiches (with chips!) , classic grilled chicken (as against the Mac one which has a sweetish sauce)...and now even Thai curries & Sushi! In fact I would go as far as to say that nothing captures the eclectic spirit of Bandra with its East Indian as well as Candies does...and yes Bandra is a happy place too.
Over the last couple of years I have seen seen the crowds grow at Candies...as have the prices (Uncle would have had a word or two to tell them on this), the chairs have become more scarce and the chaos in the ordering section even more chaotic. Just the sort of things that put me off...but no, if anything my smile grows even wider with each visit there.
What do I like there? I often stop there to pick up breakfast on the way to office - where I pick up a cappuccino and a sandwich.
And here's the thing about Candies, they always put in freebies. So with the coffee they gave a cookie (choc chip or oatmeal) or these tiny, cute pastries (little marzipan cubes, tiny rum balls, minute lemon tarts, brownie cubes - featured in the photo), they give chips with sandwiches (once when I said I didn't want chips the person came and gave me fries), with Conti lunches they give salads (macaroni, potato) and so on. These freebies give me a sense of earnestness and warmth which I rarely sense when I go to a restaurant these days.
Or it could be the cheerful red and white striped uniforms of the staff there which have a sort of happy Mary Poppins Disney feel to it.
OK, coming back to what we eat, the wife and I occasionally go there for lunch on holidays. I normally go for the Pork sorpatel (hope my doc's not listening) while the wife goes for the healthier grilled chicken (though she does favour the fries over the broccoli which comes with it, hmmm.). She loves the wild berry ice tea there (I find it too sweet). The two of us occasionally stop there on the way back from work for a sandwich (brown bread chicken or tuna jungli, classic chicken) and a coffee. But the evening crowd's a bit too much for us so we don't go there too often in the evening.
Off late we have gone on Saturdays for breakfast (coffee and sandwich). We even have our favourite table by the cake counter. I like our Saturday thing. Though the wife is a bit apprehensive seeing how I am about JATC on Sundays (re: 'pain around the corner').
PS I am sure even after reading this the wife will stick to her stand that I love Candies because of what she calls my 'little friends' which come with the coffee...and you know what, this time she is right
Candies- my favourite eating place

Kalyan Karmakar said…
the chocolate lava is this amazingly gooey orgasmic moist brownieish dessert which comes heated in a cup...too much for one person...I get dirty looks from the wife when I order it...who then throw caution to the wind and gobbles it up (its featured in my photo)
11 October 2007 at 13:47