At home at Kewpies 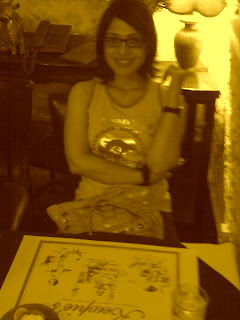 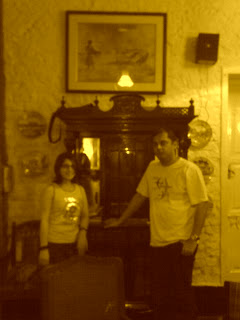 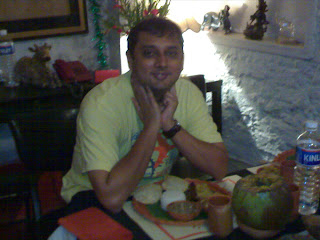 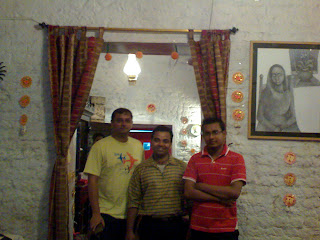 There were hardly any Bong restaurants in Cal when I left ten years back. The belief being why go to a restaurant to eat what you can eat at home. Quite a few have sprung up recently though - Bhojohori Manna, our own Mumbaiyya Oh Calcutta, various plays on "Parbon" one sees on the road and so on.
However one place which has been there for a while is Kewpies. After meaning to go there for a while we finally made it to Kewpies this time.
Loved the place, specially the way they have done up the interiors like one of those aristocratic North Cal houses (that's why I felt like taking a picture in sepia tint). The food was very nice. What I liked about place is that they have these various 'thalis' which allow one to sample a bit of everything versus say an Oh Calcutta where you have to order a la carte and therefore end up trying only one or two dishes. At Kewpies I had shukto, daal, begun bhaja, bhetki fry, chutney, daab chingri, luchi, pulao and kosha mangsho. Must confess that I loved the kosha mangsho the most and next time I go I'll order lots of that. The staff (two of them are in the photo with me) was very friendly and sweet. What I liked about the 'maitre de' was that he had point of view on what one should order in terms of what goes well together as well as the portions and he spoke in English. This would be extremely helpful for people who went in to sample Bong food but do not know what to order.
Of course what made the lunch really special was that my little baby brother was treating the two of us (the wife & me) and my mom.
At the end of the meal the maitre de asked me to compare Oh Calcutta and Kewpies having eaten at both. I wriggled out by saying that it was not a fair comparison as Oh Calcutta is in Bombay and Kewpies isn't. So I can't afford to upset them (Oh Cal) or else what would I do if I wanted to got to a Cal restaurant in Mumbai
Calcutta reviews

Kalyan Karmakar said…
em, I think the Oh Calcutta at Andheri serves one. Not the Tardeo one
5 February 2010 at 00:54

Unknown said…
I do want to go there! A non-Bong friend was raving about it. I am more keen on its interiors. Your photos speak too of that "bari-bari" feeling.
16 April 2010 at 23:28

Kalyan Karmakar said…
Gosh, it was too long ago Pree. I guess its also a bit of reverse snobbery at work. Tired by restaurants we quite liked the domesticated feeling.