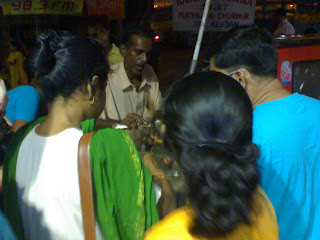 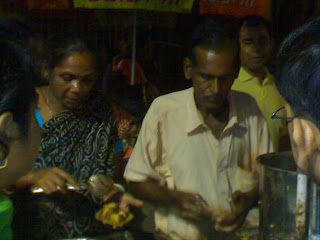 My favourite phuchka haunt is New Market. Specially the guy on the lane between the old Lighthouse & New Market. But down South (Cal) there is a couple outside Dakshinapan who are pretty good. I've already written about Dolly's spell on the wife take us to Dakshinapan. Another must have for us are the phuchkas there. In fact the stall is manned by (I assume) a husband and wife who seem to be very popular. In fact they are so popular that their are often 2-3 rings of phuchka eaters who surround them and one has to wait patiently...but it's worth it. The second picture gives a view while waiting for manna.They also make an alu dam which they try to push (same money, less labour). I bought it and had it for breakfast the next day - not a patch on the phuchkas though, quite salty too. I took a couple of snaps on my phone this time. Though the woman (seen serving the alu dom with her hubby in the first pic) complained about the fact that she looked dark (kalche) in the snap!
Calcutta reviews