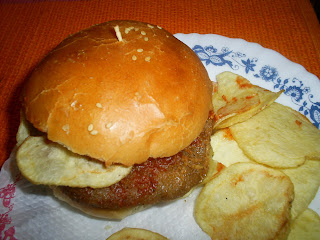 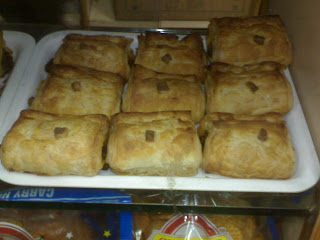 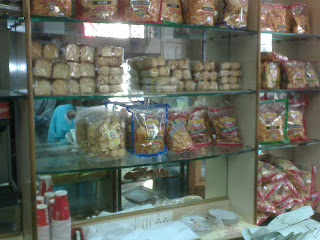 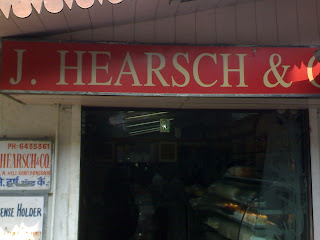 I first heard about Hearsch (H's) Bakery from this lady whose husband and her had sort of semi adopted me in my early days at Bombay. I used to live in a PG then. She recommended this when I was a bit fed up off my Indian, veg breakfasts at my PG. (Things have changed since then and I miss my PG aunty's alu parathas, samosas, upmas and pohas now).

H's is this food shop with an attached kitchen at Hill Road, Bandra beside Holy Family Hospital. It's quite an old place I think. They don't have any seating though you can stand and eat in the open compound or parcel the food.

My personal favourite there is the chicken burger with its soft, mashed chicken and potato spicy patty, unique sweetish mayo, onion & tomato rings. It is yummy, filling and for just about 25 Rupees. I often drive down to Hearsch's and get the burger back for breakfasts on holidays when the wife wakes up late. In fact I took my brother and a friend when they had come visiting me at my PG from Calcutta. They loved the burger breakfast too.


I have had the veg burger. I thought the patty was a bit chewy and they had the whiter less sweet mayo unlike the off whitish sweet mayo in the chicken burger. The veg puff is nice though
I also like the chicken roll there. It is not the Calcutta kathi roll but the one which comes in a hot dog bun. My only problem is with the chicken which is scrawny and chewy. But I looooove the mayo which like I said is sweet and tangy. In between they had shifted to a more conventional mayo (less sweet). I actually went and protested to the gentleman at the counter and then stopped going there for a while. I think I was not the only disgruntled one and they soon got the 'Classic' Mayo back. I think it costs less than fifteen Rupees.

The biriyani is quite popular there too but I find it too greasy for my taste.

I like chicken lollipops which are really crisp and should be had hot... a cholesterol dump unfortunately so have avoided it for a while. Their cutlets and rum balls are some other favourites.
They have recently extended their cake counter plus have things like biscuits and chips too.

Their food apart from being tasty is quite cheap too. I doubt if anything costs more than fifty Rupees. This is why it is a particular favourite of college students. In fact on weekend evenings it is as crowded as the famous Virar locals.

April 2016 update: I told my cousin, who has moved into Mumbai and stays at the same PG, about Hearsch. He tried it. Loves the chicken burger which costs Rs 80 (vs Rs 25 when I wrote this) now. Said its 'ekdom (absolutely) authentic' and 'best in India'.
Mumbai highs

Unknown said…
I would recommend to have a mutton roll there....Also, I guess it is one of the few places where Bebinca, the goan delicacy is available.... No doubt the burger available is one of the best.... I guess absence egg yolk from the veg burger makes it a li'l less tasty
4 January 2008 at 13:29

Anonymous said…
Ohh, if someone would only give me the recipe of that mutton roll! That flavor cannot be duplicated in any other kitchen. I love Hearsch Bakery.
26 June 2011 at 05:27