A quiet but memorable meal 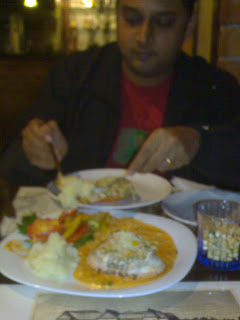 What matters to you the most when you go out to eat? Great food which sticks in your mind? A place with a buzz? A happening locality? Great service? Feeling special? A place which is written about and features in page 3?
If you have only checked point one (great food) then you should definitely look at Trafalgar Chowk (TC). TC is a restaurant which has probably had its heydays when it opened. I think they had salsa nights when they started. In fact even last year there was a fair crowd when we went a couple of times during December. In fact the owner had described it as a chef’s restaurant where the focus was on good food.
I could hardly recognise the place when the wife and I went there this Christmas, exactly a year after we last went there. The place was literally dead, gone were the karaoke and full tables . It was probably done in by its location, a comparatively barren spot of Bandra, and the plethora of restaurants which have come up in the busier parts of Bandra. In fact there was no other guest when we went though some people did come in after us.
The service? There were all of three people manning the place. The manager, who I must say was confident about the quality of his sea food. A waiter, who sheepishly confessed not to know much about the menu. And a bar tender who doubled in as the second waiter and who definitely did not know how to mix a drink and made the most lethal and undrinkable Long Island Tea ever.
So why go there? Simply because they have the most awesome food, a mix of continental and Oriental items.
Our favourite is the beer batter prawns. The wife and I had them each time we have been there and never tire of them. These are juicy, large prawns fired in the thinnest but tastiest of batters. You get to taste the prawns unlike in batter doused koliwada brawns and yet enjoy the slightly salty and tangy taste of the batter. They serve it with a tartar sauce like dip but you don’t need it.
We tried their crabs in Portuguese herbs this time and loved them. These are crabs served in shell and are baked in a cheesy mix with slightly sweetish ‘Portuguese’ herbs. They are really tasty. In fact they matched the Devilled Crabs of Mocambo in Calcutta…and that is quite an achievement. Definitely worth repeating.
We had the Pork spare ribs in hoisin sauce which were not bad but our taste buds were still tingling to the beer batter prawns and crabs. In our earlier visits we have had the Moroccan lamb. That’s nice – succulent chunks of lamb in a thick brown gravy.
I must admit that Trafalgar Chowk did not seem to be the most exciting place to be in. But it has dishes which have stuck in my mind…and I can’t say that for some of the fancier restaurants. It is definitely a place I will head to again. And I know what I will eat there too.
Mumbai highs