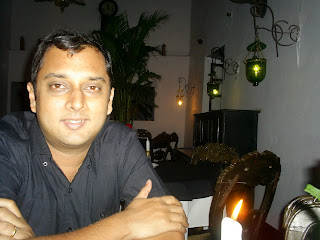 I am a man of routine. Once I discover things I like, I stick to them.

So this is how life works for me: I like celebrating my birthday out of town, away from the hustle and monotony of life. I like Baga at Goa. So I have gone there for my birthday in February for the last three years. At Baga I like to eat specific dishes at specific restaurants such as Brittos and Infanteria. So I have my meals all planned out between these places before I leave from Mumbai.

The wife largely indulges me on this and goes along…’largely’ is the key word here and this post is about a time where I am glad, in retrospect, that she tried to break my routine!

She would often point to a restaurant called Casa Portuguesa which fell on the left as we walked towards Brittos for dinner during our earlier trips. I’d brusquely shrug off her suggestions to go there by saying that we did not have too many meals (since our trips are normally for a couple of nights) and that we should not waste them by going to unknown places.

This time though I gave in and said that I’d take her to Casa Portuguesa (CP) for dinner on my birthday. And yes honey you were right and I should always listen to you (ok now let go of my throat please). 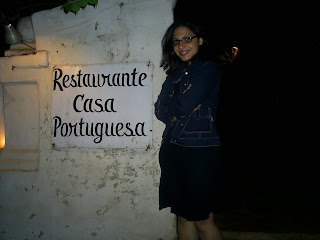 We had an awesome experience there. CP is modelled on a colonial Portuguese house. It has antique wooden furniture, glass lamps, candle stands, the works. Seemed like another era. It reminded me a bit of a restaurant called Kewpies in Calcutta which is modelled around an old, aristocratic Calcutta house. 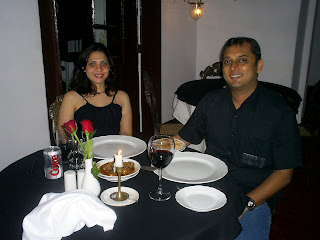 The waiters were very friendly and were well versed with the dishes on the menu. We ordered two dishes and what amazed me was that the person taking the order suggested getting them in a sequence. That’s the way I like eating my food. Except that in all other restaurants I have to state tell them to get the dishes in a particular order. I was quite impressed when the waiter suggested this by himself.

We started with the complementary home made breads as we waited for the food to come. They were very different from anything we had and had a slightly tangy, fermented taste. The texture was a bit chewy and coarse in a nice homemade way…you could sense the difference from mass processed bread. The dips were very nice too. 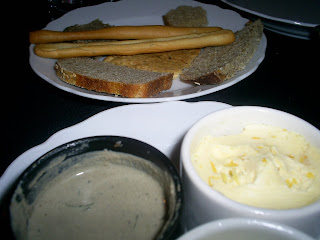 The first dish which we had was a duck dish. I was amazed by the curry which was brown and looked like an Indian curry. In fact I asked whether it was a Goan dish or whether it was a Portuguese dish the way one would get it in Europe. I was surprised to learn that it was indeed Portuguese. My impression of European dishes till then was that of steaks and pasta. This was a cultural eye opener…and it tasted bloody good. The gravy was very well flavoured you could see fine bits of tomato, red chillies and onion. The duck was very tender. Though, as I saw in Zenzi, the duck tasted closer to red meat than white meat. 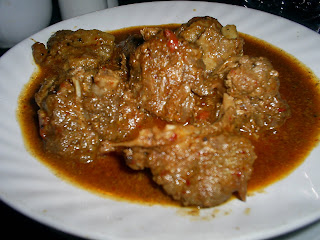 The next dish was the piece de resistance. It was an apparently uniquely Portuguese combination of pork and clams served in an earthen pot. The pork chunks were soft and fatty while the clams gave an interesting, slightly tougher counter bite. It was truly the Liz Taylor and Richard Burton, or, as we Bengalis would say, the Uttam Suchitra, of food. The two meats combined very well in the lightly flavoured gravy. Fishing it out with a wooden ladle from the pot added to the experience. 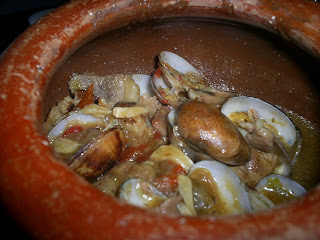 For dessert we had a chocolate cake which the wife (a chocoholic) and I loved. It was like a mashed, juicy, sponge based cake. I would take a bite in my mouth and then let it melt and slide down my throat.

All of this along with a red wine and a vodka cost us around fifteen hundred rupees or so which was a steal. I don’t remember the exact cost but I didn’t go into depression when the bill came.

They served a complimentary Port at the end which was lighter in colour and taste in comparison to the more sticky Goan Port.

It wasn’t just the heavenly food and the classy ambience which made Casa Portuguesa special. What made the evening magical was the owner Francesco who came in and sang Portuguese songs in a sonorous voice. He is an advocate by profession who runs this place. Thin, tall, with a ponytail…he transported us to the crowded streets of Lisbon with his guitar and his songs. His passion showed in the food we ate, the décor, the mood and the excellent service. I wish him all the best. Plus he called us a honeymooning couple…felt good to hear that after six years of marriage…but Casa Portuguesa is that sort of place…it oozes romance.

We also met a middle aged, Swedish couple who were sitting in the next table. They were very friendly. The lady herself was a chef back home in Sweden. She and her mother organised dinners in a theatre when plays were hosted and cooked for more than a hundred people at time without any help!

It was a memorable night and it seemed that our new Swedish friends, Francesco, the wife and I had got together to celebrate my birthday. It is one birthday dinner that I will definitely remember.

But we will go to Goa for my next birthday!
Goa