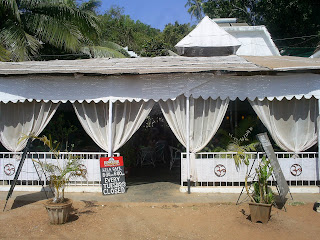 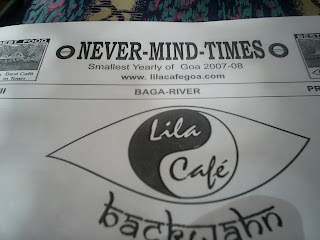 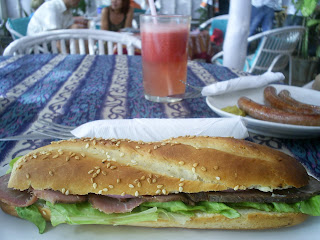 I first heard about Lila’s Café from my friend, Projnan, over a Bengali lunch at his place on a Sunday afternoon. That is when I found out that he is as much of a Goa buff as I am and goes there at least once a year himself too. I guess there is something about the sea, the languorous breeze, the fish, the meat and the cheap alcohol which attracts us Bengalis to Goa. Anyway, he strongly recommended Lila’s as a place to have breakfast. Having gone there, so do I!

The wife and I went there on my birthday for breakfast. And it was special if anything – the food, the ambience, the airiness, the cane chairs, the service, the river breeze – it was a great experience. 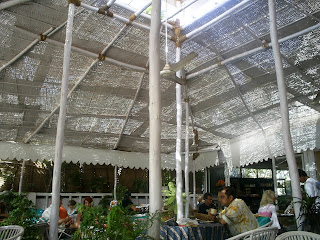 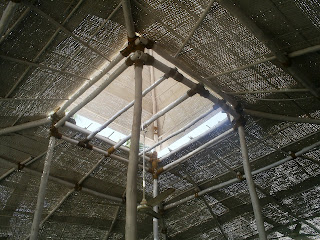 To start with it, it is near the river. So we were away from the sea which was otherwise our constant companion. The cab cost us one hundred Rupees from Baga. The place was under a big white canopy. It was very classy with a lot of wood work, ceiling fans, straight out of a Merchant Ivory period film. In fact we did see a group of British ladies who where dressed in white dresses, hats, straight out of the koi hai days of the Raj.

Lila’s is run by a German couple who came to Goa and then stayed back. The spread is continental. They claim the food is healthy as they make most things – the breads, the meats, cheese, butter, etc – in house. And I must confess that the food did taste distinctive.

We started off with a refreshing water melon juice. Post which the wife had ‘English Sausage’. The sausages tasted very good – nice and juicy. 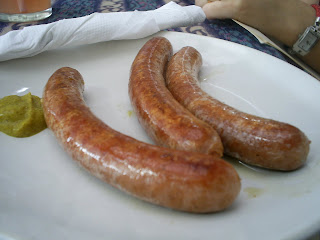 I had a baguette which apparently is a French bread. It was crusty and yet tender. This was the first time that I had a baguette and I quite liked it. I had it with ‘water buffalo ham’ which they made at Lilas. I had never had water buffalo ham before either. The slice was half an inch thick, yet very tender. It was less salty than regular ham. I liked it. Like my mom in law would say, worth repeating. 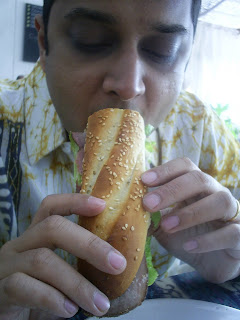 The wife then remembered reading about baguettes and cheese in her French textbooks and ordered one. That tasted pretty good too. The cheese was made at Lilas and had a slightly granulated, pasty texture which added to the experience. It had a slightly chilled and salty taste which was offset by the baguette.

All of this and a cup of Cappuccino cost me around three hundred Rupees which was completely worth it. Add another two hundred Rupees for travel though if you hire a cab from Baga.

Good recco Projnan. You have earned your Madame Rossa
Goa