Eating across Europe without a visa 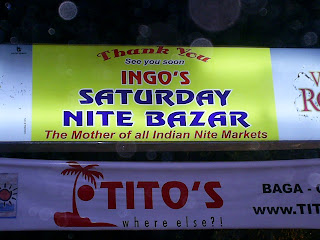 Our trip to Goa this time was all about new experiences. Therefore it was fitting that we had our last dinner at Ingo’s Saturday Night Market versus our traditional last supper at Infanteria.
In fact it was almost as if we were fated to go to Ingo’s this time. We were supposed to have returned to Bombay on Saturday. We were staying at our usual hotel, Villa Goesa. However this time (our fourth stay in three years) they really messed up things by giving us rooms with broken beds, flooded bathrooms, noise transmitting walls, leaky showers and gloomy lights. At Rs 2,800 it was a steal. For them, that is! And they did not seem to give a rat’s a$%@ about our discomfort as they were full.

So the wife and I walked around Baga and found a lovely little place called Waters behind the Subway at Baga. Very nice rooms. Very tastefully done. Four coaster bed. Nice and spacious toilet. (2500 Rs including breakfast). Each room is on the theme of a colour. We were in the red room! The room really made us happy.

Anyway the point of saying all this was that we fell in love with Waters, moved out of Villa Goesa a day early and then extended our stay by a day. That meant we were at Goa on Saturday night.

When I messaged fellow Goa buff, Projnan, about this he immediately said that I MUST go to Ingo’s Night Bazar as we were there on Saturday. He said he had a lovely time there earlier shopping, seeing the shows and speaking to the ‘German Bakery lady’. He also specified that we must go the right market as there are pretenders too. This turned out to be an invaluable tip as our cabbie was trying to palm us off to some other market. Projnan advised me to hold on to my wife’s hand or she would wonder off and shop us to bankruptcy. (Incidentally Projnan, who is proud of his St. Xaviers’ English Lit heritage writes long SMS texts and Orkut community comments when inspired).

I was still in two minds when ‘Maguire’ from Infanteria insisted that we go there instead of eating at Infanteria. He said that we would get from food from all over the world over there.

Well the wife and I went Ingo’s and found it to be a mind blowing experience. The market was spread over a huge area with little stalls set up by locals and foreigners. There were lot of good bargains going around – spices, exotic teas, clothes, beads, bags, trance CDs, curios, Tarot readings, the Dalai Lama’s writings and what have you. There was some sort of fashion show going on in the middle with models from various countries. There were people from all over the world at the market. Did not seem like India. 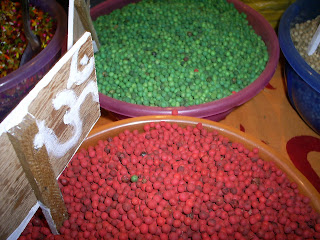 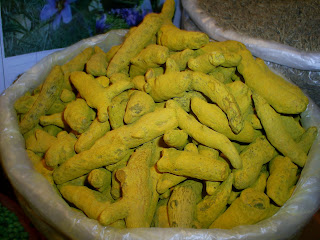 Despite all this chaos one could sense that the market was well organised. Apparently it was started by a German gentleman. The market reminded us of Bangkok’s Chatu Chak weekend market. 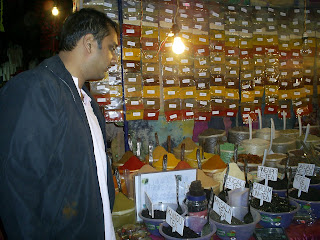 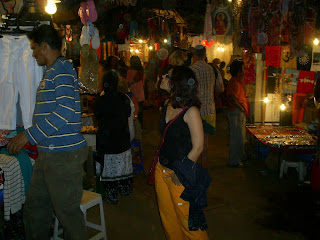 And the range of food? It was a true United Nations of food going on. 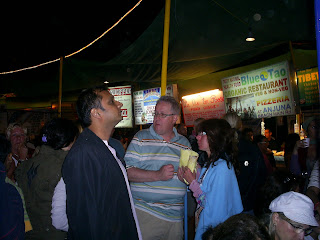 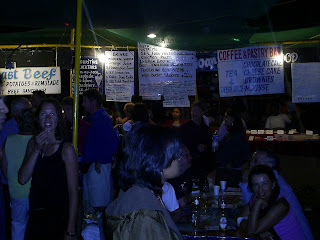 There was a Turkish gentleman who was making Turkish kebabs – which tasted awesome, very succulent and we loved the salad which came with it. 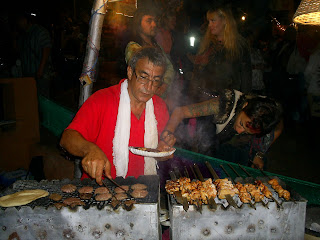 A Brit who was selling Shepherd’s Pie and, what else, Tandoori chicken! 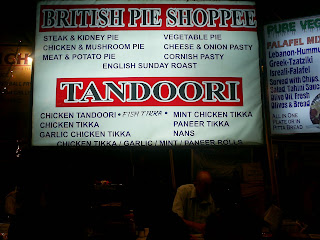 There was French food, Greek food (a sort of shawarmas). German Schnietzel, Sauerkraut (unfortunately over by the time one reached). I can go on an on. 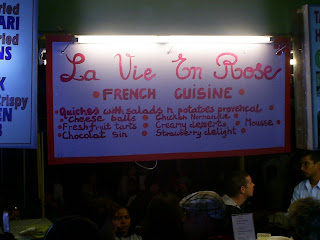 But what stood out were this European couple and their coffee stall. You would have had cappuccinos and the like from machines at coffee shops. Well here was a man who, unfazed by the crowds, was making cappuccinos and moccaccinos with his hand, using a beater! Definitely a unique experience and tasted great too. We had a rum and raisin brownie which has wife had made. It was very fresh and tender despite the crusty exterior. It melted in one’s mouth even though it was not warmed. 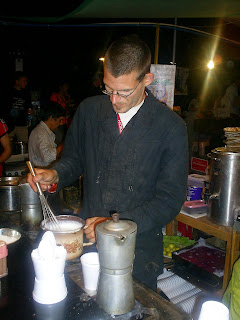 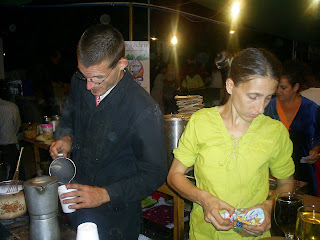 A great end to a great holiday!

k said…
If you find yourself at ingo's walk to the stall selling fresh flavoured tea and pick up some mango and strawberry tea. You won't regret it.
22 February 2008 at 21:17

Kalyan Karmakar said…
which is actually the Indian spices shop in my photo. Made same fairly nice ice tea with it
24 February 2008 at 22:03

Jessica@Foodmayhem said…
They look serious about their cappuccino making.
4 March 2008 at 19:05

Kalyan Karmakar said…
it was a magical experience indeed...their brownies were awesome too
5 March 2008 at 12:01

Unknown said…
You have been talking bout ur experiences around Baga, so I feel you should try going out a li'l bit... There is this place close to Calangute (15mins i guess) called 'Florentine' where they serve good Chicken Cafreal....Also, make sure to visit Ritz Classic - a restaurant at Panjim, am sure you will simply love it.....
11 March 2008 at 20:23

Priya said…
I don't know if you know this, but the couple who run the stall where you had the brownies and cappuccino also have a place called Coffee Heaven in Arpora. It's a hidden gem and what I especially liked was their German-style brunch that they hold on sundays. That's all we did every sunday for 2 years till we had to move. :( Great people, great place and great food!