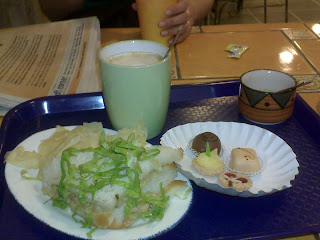 I am not a morning person. But I am definitely a breakfast person. I strongly believe in the adage – ‘morning shows the day’ when it comes to food. A good breakfast is something which sets the tone of the day for me. And I can’t function without breakfast.

I grew up largely on omelettes and bread rustled up by my mother before she left for work. I used to look forward to the traditional Bengali breakfast of luchi and alur dom or chholaar daal at my grandmom’s (Didu’s) when I visited her. When I begun to work then I would have a uniquely working Bengali’s ‘breakfast’ - lunch! Office goers in Calcutta tend to eat rice, fish curry, daal ( a full meal) and then go to work. Over the year’s I have found out that there are some who do that (sp eating rice) in the Far East too.

You can make out the importance of breakfast to me from the fact that I drag myself out of bed and try to put something together for myself, even though I barely function in the morning. I try to make an egg white omelette and scour the kitchen for some fresh bread. Or I chop some strawberries and add it to milk and have it with a fairly expensive, but yummy, blueberry cereal that the wife has bought me.

In the phase preceding this we would stop at Candies on the way to work where the wife would pick up a coffee (with complimentary tiny pastries) and a sandwich for me.

Breakfast has in fact been an integral part of our marriage. In the months following our marriage I would try to cook up nice dinners for the wife. The wife, in turn, knowing my morning inertia, would make breakfast for me – scrambled eggs, fried eggs and toast, the Parsi saali par eendu, upma, uttapa with a Pillsbury mix and the like.

With our work schedules, late nights and our late waking up times it has been difficult to stick to these breakfasts. However, we do make it a point to go out for breakfast on Sunday and occasionally on Saturday too. Our favourite Sunday place is JATC and its waffles…followed by Candies. This is definitely the part of the week we both look forward to.
Food musings

Unknown said…
Thanks for visiting my blog and leaving a comment!
And I will certainly be happy to continue to share my baking experiences on my blog! :)
The link you gave me was quite interesting as well. I've never tried foreign desserts before (except Belgium chocolate once), but I think it would be fun to try thinks like the Bengali sweets.

Kalyan Karmakar said…
Bengali desserts are the most famous ones in India. Need I say I am Bengali too (hence the bias). The only thing is that people rarely make Bengali desserts at home. We normally buy them at sweet shops. My dad was pretty good at making Bengali sweets though.

I used to make chocolate souffle and a micro wave chocolate cake, from recipes from Milk Maid condensed milk, for my wife soon after we were married. They used to turn our pretty well. I used to find the cake specially thrilling as I was very kicked with the idea of making bread! I also used to make a smiley on top of the souffle bowl with Gems (tiny chocolates like Smarties). Haven't made desserts in ages. Keep eating them though :)
27 February 2008 at 13:56

Kalyan Karmakar said…
I started the morning with some lovely French toast which the wife made for me today before we went for walk...
28 February 2008 at 13:08