Eating with the Vikings 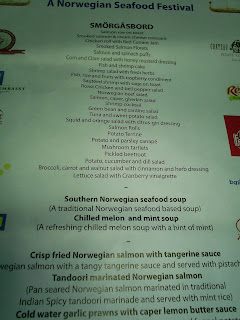 The wife and I went to a Norwegian food festival at the Dadar Catering College with a couple of our friends on Sunday. We had gone to their Japanese food festival last year and liked it.

The food was very good this time too with lot of Norwegian pink salmon as promised. The appetisers had a smorgasbord of salmon in various forms – salads, with herbs, in buns, salmon puffs, etc. We loved them. I figured out that I like salmon raw rather than cooked. I had a bite of the crisp batter fried salmon which was disappointing compared to the raw ones.

I also tried salmon roe for the first time in my life. They looked very exotic, like orange pearls. The taste was new too and they were like tiny balloons of juice which would burst with each bite. Very different from the roes of fish like rohu or hilsa which I am used to which become hard when cooked and give an egg like taste. 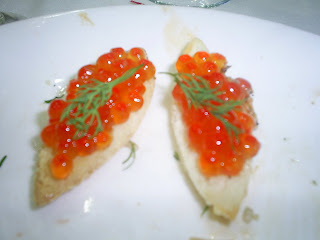 While we had gone for the salmon I also enjoyed the Norwegian beef salad and the roast chicken and bell pepper salad. 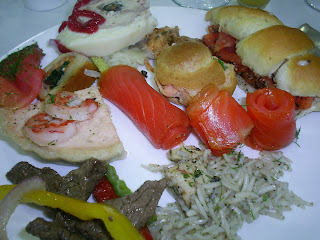 I also had a Southern Norwegian seafood soup which was nice and creamy. I was a bit foxed by the dash of saffron in the soup. I liked the break in taste that it gave to the overall body of the soup. However, I did not associate saffron with the Vikings. Was this an attempt at fusion cooking?

I had ‘cold water garlic prawns with caper lemon butter sauce’ for the main course which was mind blowing. The prawns where huge, succulent and juicy and the sauce was well flavoured. The ‘crisp fried Norwegian salmon’ which our friends ordered paled in comparison. In fact the wife changed her order to prawns after seeing mine! 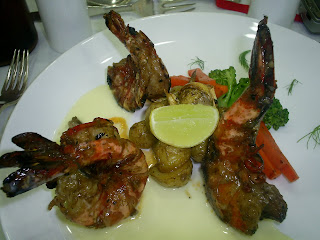 PS. The wife loves Norwegian pink salmon. I hope she doesn’t see this post before coming home tonight. I plan to surprise her by buying some imported Norwegian pink salmon from a store called Santé at Bandra, which keeps imported food. I will make it in a creamy pasta for her…pasta is her other favourite food.
Mumbai highs

Kalyan Karmakar said…
actually I live at Mumbai, India. this was at a food festival organised by the Norwegian embassy
19 March 2008 at 12:30