Hey Bono, I've found what I was looking for ... Kakori House, Bandra 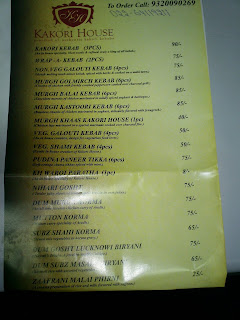 I have spent ten years searching for good biriyani (Indian pulao with meat) at Bombay.

A Calcuttan’s definition of ‘good’ biriyani is the Lucknowi version which we get in Calcutta – dry (no gravy unlike in the Bombay variety), each grain of rice should be separate and the spices should be subtle and fragrant rather than over powering.

I finally came across it yesterday when I ordered from Kakori House at Bandra. I got the lead from my friend Imraan who sent me the number when he heard about my blog and my interest in food. The biriyani was AMAZING. The mutton was succulent, there was no gravy, and the rice was long grained and separate - very well flavoured. If I knew Imraan’s address I would have run across and given him a bear hug. 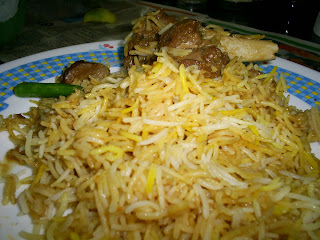 The only thing was that it didn’t have potatoes. However, I recently read in Chitrita Banerjee’s Eating India, that the Lucknowi nawabs added potatoes only after the British exiled them to Calcutta and when money was scarce. So the Lucknowi version was sans potato.

The biriyani was the tip of the iceberg. We ordered the kakori kebabs. I had kakori bkababs earlier at ITC’s Dum Pukht and loved them. These kebabs are so soft that you can literally suck on them as they melt in your mouth. In fact they are so delicate that they often break while serving. History goes that they were created by a Lucknowi chef for a Nawab who loved to eat but had a digestion problem.

I was a bit wary while ordering kakori kebabs though as I had had bad experiences (e.g. Moti Mahal and Shatranj Napoli at Bandra) when I had ordered outside the confines of the 5 star ITC restaurants. The kakori at Kakori House were, however, the real Mc Coy. The wife and I kept moaning in pleasure with each mouthful. 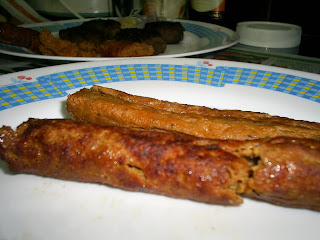 We also ordered the poor man’s Kakori, galauti kebabs. These are supposed to be as soft as kakori but are shaped into little balls which are easier to fry than the cylindrical kakoris. The galautis too were outstanding. Extremely soft. I would take a bite and then keep it in my mouth and enjoyed the sensuous play off the juices. At the risk of sounding like a barbarian I must say I preferred the galauti to the kakoris, but then it was like choosing between Ms Universe and Ms World! 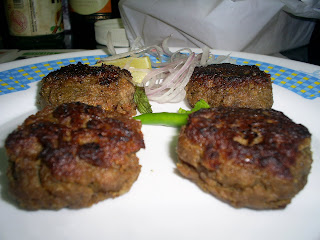 The biggest shocker was the price. The mutton biriyani, the kakori (3 pieces) and the galauti (4 pieces) were all for 240 Rs. Which is amazing since you can only get the same quality at ITC hotels which are 5 star hotels with 5 star prices, or in the streets of Old Lucknow. And yes you, you would get the biriyani at Calcutta. But what about the airfares?

Kakori offers Lucknowi food and is a home delivery joint (09320090269) which delivers only at Bandra. They have outlets at Lucknow, Delhi and the Cricket Club of India, Bombay.
Bandra Bites Indian food Mumbai highs

Scarlett said…
Thanks for putting up Kakori's number. My boyfriend, like a true Bong, loves mutton biryani. We tried two places when he was down from Calcutta - Nooriani & Jaffer Bhai's Delhi Darbar - and he rejected both! Apparently they don't make biryani in Bombay like they do in Cal!! He's a Rehmania fan. Hopefully, Kakori's no. will come in handy next time!
12 April 2008 at 21:43

Kalyan Karmakar said…
I must warn you that I've later found out that Kakori is not as user friendly as the rest of Mumbai. So they have a 2 hr waiting period if u call on Sat night. Plus I tried calling for a single biryani on weekday afternoons - no can do, not big enough.
BTW ask your boy friend to try the biriyani at Lucky. Tell them not to put ANY masala. Comes close. The biriyani at Oh cal and Clacutta Club (Oshiwara) is not bad
14 April 2008 at 10:57

Scarlett said…
Actually, I'm not a big fan of Lucky's. I think their Biryani is too dry. I like Noorani's & Persian Darbar's chicken tikka biryani...which has loads of chicken tikka masala at the bottom. But I guess Cal biryani is the dry types, so maybe he'll like Lucky. I'm really curious to find out what Rehmania's biryani is all about....shall do very soon.
14 April 2008 at 21:36

Shanky said…
Galauti (or Gilawati) is not a poor man's Kakori. The two are different kababs, and actually Galauti is the more famous (courtesy Tunde's kababs of Lucknow).
1 November 2010 at 12:26

Kalyan Karmakar said…
Well Shanky I was coming from the context of what Vir Sanghvi wrote on Kakori & Gulaoti in Rude Food. I read it a while back but I think he said that gulautis were easier to form and manage and lent themselves better to non nawabi ktichens
1 November 2010 at 12:42

viagra online said…
It is indeed hard to find a good place where they serve a good biriyani, I'm still looking for the place.
11 January 2011 at 22:25