Sadri - he made Langkawi special for us 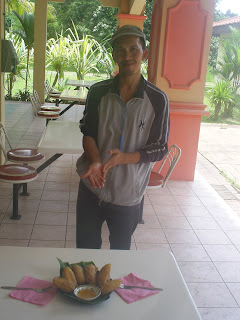 I thought that I must begin my first post on my eating experiences abroad with Sadri.

Sadri owns a hole in the wall restaurant in the food court at Langkawi, Malaysia, at the cable car place.

We went to the food court while we were staying at the Berjaya resort at Langkawi. Most shops were shut as it was Ramzaan. We were fretting at the prospect of going bankrupt if we had to eat at the restaurants of the resort. That’s when someone pointed us to this food court. There were only two shops which were open. One was Sadri’s. The other was run be a couple of enterprising, energetic sisters. In fact we had our first couple of meals with the girls as they would be the first to dart to new customers. The food was quite good there – specially the satays.

Sadri was a comparatively shy person and did not seem to directly approach customers. We did go to his shop a couple of meals later for variety. And boy, it was a great discovery.

Sadri is what I call a man of food. The food was extraordinary. In fact most customers came back to him because of the food rather than any efforts to sell. His shop was simple and yet he would serve the food in a way which compare with a gourmet restaurant. He obviously took a lot of pride in what he served. So the curries would come in a bowl in a cane basket and were garnished aesthetically with lemon grass. 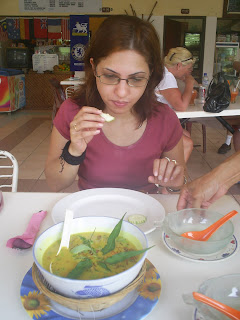 Once we ordered a prawn dish which came in a carved pineapple shell! The curries tasted very good. The texture was lovely and sometimes one could make out flecks of turmeric or chilly powder which added to their mystique. Whatever he would recommend would taste good. We were introduced to Malay curries, which are not as famous as their Thai cousins, thanks to him.

The only times when Sadri got stumped were when he would serve something which he thought was spicy but actually did not daunt our Indian palate.

Sadri’s was not just about the food. He was a very pleasant man to speak to, humble and very warm. And he knew his food. I used to feel as if we were in a family member’s house at his restaurant. Both the wife and I miss his restaurant. He really made our holiday specially. We hope we can make it back to Langkawi someday, just to meet and at eat at Sadri’s. 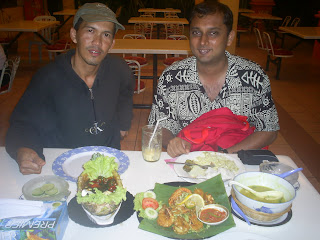 Kalyan Karmakar said…
This, after I featured her liberally on my site in the 5 Spice and Oh Calcutta posts
24 March 2008 at 01:05