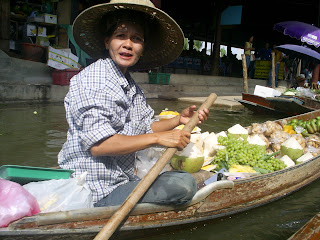 The wife and I took our first international holiday together a couple of years back in 2005. This was to Thailand. We have a lot of lovely memories - the King’s palace, the river cruise the floating market, the bridge on the river Kwai, Ayuthaya, the Amari Orchid at Pattaya, the clear waters of the Coral island -but nothing beats our food memories.

Our favourite at Bangkok was this lady who had a curry cart outside the Ambassador Hotel at Sukhumvit, Bangkok. She had the most awesome of curries with an assortment of meats and fish. Don’t ask me the names because we would communicate with her by pointing out at the curries we wanted and she would serve it to us with rice. The price was about 50 Baht or one USD per plate. They were the tastiest Thai curries that I’ve ever had. She used to only sit during the day though so we would miss her at night. The wife and I used to refer to her as ‘Mashi’s’. Mashi means maternal aunt in Bengali. We had come to Thailand after a stop over at my mother’s at Calcutta. We used to call the cook at my mom's, Mashi. 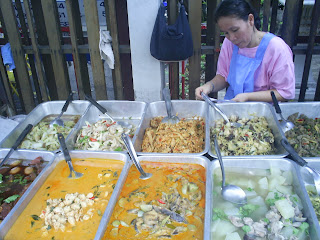 We also had yummy satays and sausages which people would serve on the streets. These were grilled on little wooden skewers. They tasted nice and juicy and the wife was particularly fond of them. 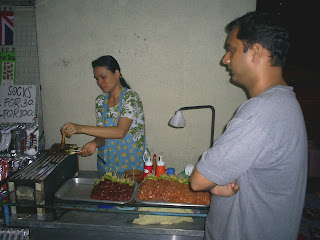 We had a couple of lovely gourmet experiences at Bangkok. We owed this to Jasojit in Calcutta. I have known him for a decade now and he was the first person to give me a job. He is what I call a man of food. He knows his food and loves it too.

I had asked him for good places to eat at Bangkok. He recommended a place called Soi 5 at Sukhumvit. The wife and I had the most awesome red curry when we went there. He also recommended the famous ‘Cabbages and Condoms’. This is a quirky place run by the social ministry. They entire décor is based around condoms and espouses safe sex. In fact they give condoms instead of mints after a meal! Cabbages and Condoms is not just all jazz. The food is awesome too. We had a couple of very nice curries there. The picture below is of a table decorated with condoms below the glass top. 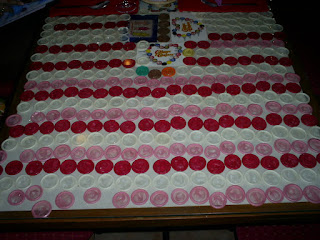 The Sum Lum night market was another memorable experience. There was this huge food court here. There were tons of people and there was some sort of a local rock concert going on. There were a number of food stalls. Again one had to go by the judgment of the eye as very few of the people seemed to know English. But the food, as always at Thailand, was a delight. 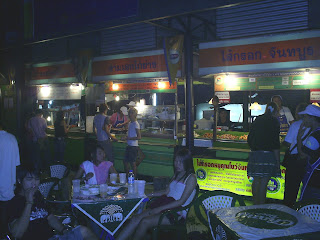 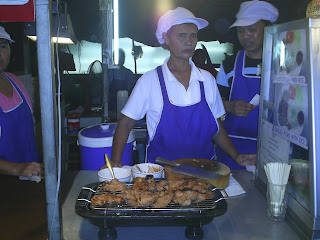 We also had a nice dinner and lot of (watered down I am sure, they hardly kicked) tequilas at a restaurant at Pat Pong, the red light area of Bangkok. The service was lovely though. The waiters were gay I think... or lady boys and kept smiling all through. 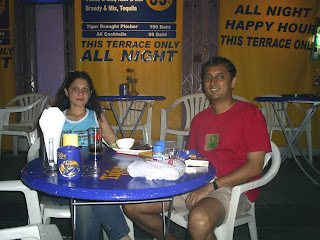 This was the story of Bangkok. We also miss Kiss Food and Drinks, the open air restaurant at Pattaya. The name reflects the raunchiness of the town but actually is of a very simple place with very tasty and reasonably priced food (especially curries). 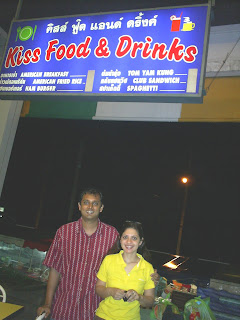 We had a lovely meal close to the River Kwai. A great one on the river cruise while returning from Ayuthaya. The Tom Yum soup was great here. And of course how can I forget the lovely yogurt based ice cream that I had at the Chatu Chak weekend market at Bangkok? Well before we got introduced to gelatos here.

Thailand means many things to many people – history, Buddhism, silk, lovely beaches, elephants, massages (sandwich and otherwise), markets, artefacts, lady boys and escorts, malls, mountains – but to the wife and me it was all about the food. 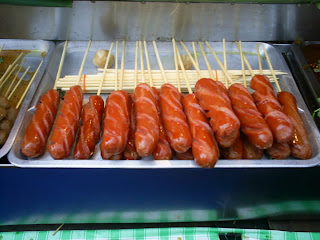 Unknown said…
'Cabbages and Condoms' is definitely an experience for food and moresoever the decor...In case you need more pics of the place, I can help you :-)
30 March 2008 at 12:46