on April 17, 2008
I had earlier written about how I had met some people for the first time and then went out for dinner with them at Clark Quay and had a great time.
Well, I had a similar experience a couple of days later. It was the last day of the conference that I had gone to Singapore for and I was at a loose end. A prospect of an Indian, dosa, dinner was looming large.
That's when I saw three people sitting in the table beside us discussing their plans to explore the food of Singapore. I jumped up, joined their table and invited myself in. This was the beginning of another great evening at Singapore.
The three I joined were Kenneth from Singapore, Ann from London and Dezma who turned out to be from the suburb where I live in at Mumbai, Bandra.
Kenneth was playing the host for the evening and he was a very gracious host indeed. I think he was great ambassador of all the warm and smiling Singaporeans I came across during my stay there.
Earlier in the day I had presented a paper comparing Mumbai and Shanghai at the Esomar conference where we had made the point that these two cities were almost like twins separated at birth. Well as the evening progressed we joked about how the twins separated at birth label could apply to Kenneth and me too. The evidence:

Kenneth took the four of us to the East Coast. East Coast is on the beach at Singapore. You can see ships lined across the sea. There are nice landscaped lawns and jogging tracks. Plus a Hawker's Centre. A Hawker's Centre is a food court with a number of local food stalls. You place your order and then have your meals in the courtyard

Some of the awesome eats Kenneth treated us to included scrumptious fried chicken wings, a stingray where half the fish was seasoned with lime and the other half with a spice paste, juicy lamb and chicken satays, a very interesting shrimp powder and yam Oriental salad/ stir fry and huge plates of mussels and clams. We washed this down first with Thai coconut water (much sweeter than what I have had anywhere else) and Tiger Beer. 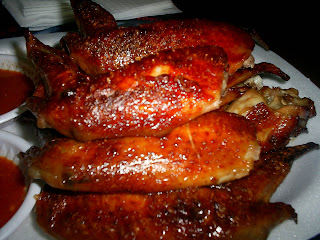 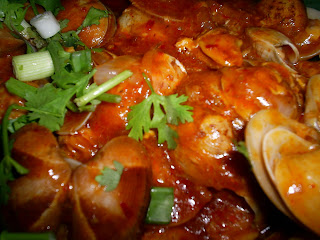 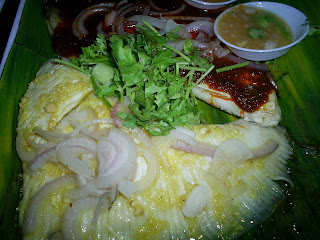 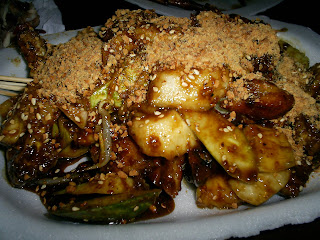 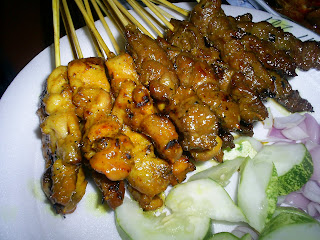 It was another remarkable evening where I bonded with three people I hardly knew over good food and by the setting sun... strengthening my belief that there is nothing like a good meal had with good people. A fitting end to my trip. Thanks for letting me barge in on your evening guys! 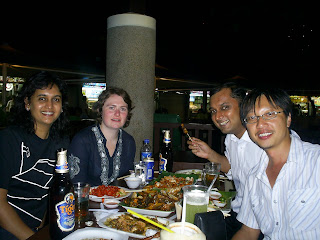 Kalyan Karmakar said…
And this with our good old SAMsung. Now let's see how the Sony I bought at Changi works out
18 April 2008 at 17:07

Anonymous said…
Oh the warmth of the coast and fishy offerings on the East Coast. Another Tiger beer please!
18 April 2008 at 18:09

Kalyan Karmakar said…
Singapore is really the food capital of the world. The range of food one gets is amazing. The local food is great too. Even vegetarians should not have a problem as there is a lot to offer and plus vendors understand English
22 April 2008 at 13:27

jade said…
The post is written in very a good manner and it contains many useful information for me.
Food Trucks In Los Angeles