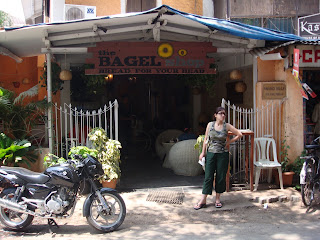 I was in two minds about whether to put The Bagel Shop in Mumbai Highs. I love the ambiance. My experience with the food has been from the sublime to the mundane. The prices are very high.
Then I asked myself two questions: would I go back? would I recommend it? The answer to both is 'yes'. So there... you have how I feel about the place. Now let me give you the pros and cons.
Bagel Shop is about a year or so old. It is at Bandra in the by lane which connects Pali market to Carter road. It was started by expats...I think the same people who own Zenzi.
It is a small place which has two rooms and an outdoor seating. It has a nice relaxed atmosphere with its cane chairs, plants, coffee table books and is a welcome break in a busy city like Bombay.
As the name suggests it's menu consists of bagels plus nice coffees, juices, muffins, etc.
The wife and I had gone there are a couple of times before. We had loved the bagels, especially the salmon ones. It was quite unique. The only problem was that at about Rs 150-200 (4 USD) it was expensive and not very filling. Yet, I have always seen a fair amount of people there so it's obviously popular.
The wife had asked me to treat her there after I got my first salary in my new job so we went there recently. We were a bit disappointed that they did not have salmon. So we ordered two ham and cheese bagels. What we got was quite different from what we remembered. To start with there were two bagels per plate (Rs 190 per plate) while there was only one per plate before. So we ended up with four bagels which were a bit too much. I wish the staff had pointed this out when we had ordered. I also remembered the bagels being closed ones before and not toasted. They were open this time and toasted. The ham was very nice. The cream cheese was nice but was melted and was a tad too much. The net result was more like a pizza (crust, melted cheese) than the delicate flavoured bagels that I remembered having there earlier. In fact I was feeling a bit uneasy and then took things in my own hands and closed the bagel to make it closer to what I remembered. 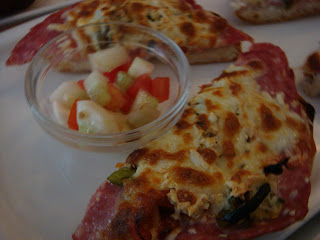 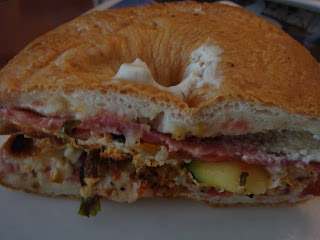 We also had piping hot cappuccinos which were quite nice. I had a blueberry muffin (Rs 50/ 1 USD)which was oozing with blueberry sauce - a must have. 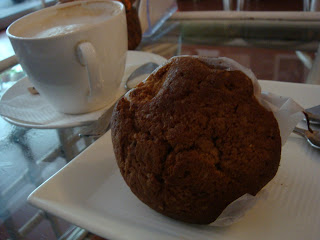 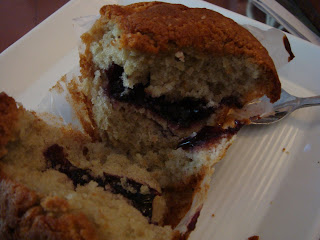 They gave the bill only after I asked for it a couple of times. They were lucky that I insisted as I pointed out that they had not charged me for the muffin!
A fellow foodie went to the Bagel Shop recently after I recommended it to him. He got a salmon bagel but felt that the cheese was too much and overpowered the salmon. He also felt that the service was not prompt.
So pros: nice setting, food which was different. Cons: expensive, inconsistent quality. 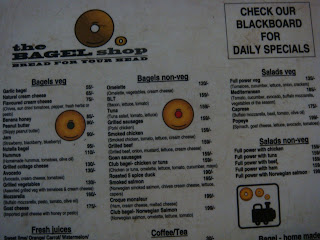 Anonymous said…
Somehow, I always associated bagels with being soft, fluffy and delicious. So my first shock came when I tried bagels in the US in LA.

It was very different. BTW, Bagel shop is run by the same management as Zenzi's.

How would you compare our pau with bagels? Maybe you could try the exotic fillings - Philly cheese, honey glazed ham etc?

Kalyan Karmakar said…
@ Kirti...I had a similar expereience when i had scones in the Tea Centre. I had imagined scones as conical things while reading about the in Enid Blyton.
Re: Zenzi...yes the pricing says that too :)
I have tried pao with cheese spread, salami. Didn't like it too much. I think the texture of pao is a bit too coarse...works better to wipe up a curry with like a sorpatel or with something which is greasy and spicy like vada, Goan sausage fry.
I think it is slightly salty and over power more subtle Western tastes, spreads
12 September 2008 at 15:28