A bite of America at TGIF 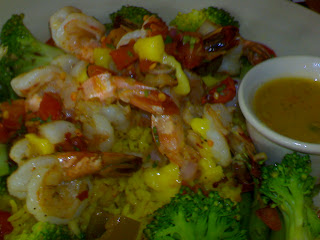 I had my first experience of TGIF during a recent trip to Delhi.

I was a bit sceptical when I went. I think I had read negative reviews TGIF which had said the food is without character, is standardised and over priced.

Well I had something called Keywest Maine Shrimps if i have got the name right. I loved it. The prawns were big, juicy and fresh. The raw mango was a nice subtle touch and the rice almost tasted like Indian pilaf. My boss, a fellow foodie, who was with me said that that this was a creole dish and creole dishes apparently have a taste which is familiar to our palate. The photo which I took from my cell phone doesn't do it justice.

My boss had a Jack Daniel burger which looked sinfully tasty. I did whack some of his fries while he was placating an irate client on the phone. I quite enjoyed the sweetish dip which it came with.

We both ordered strawberry lemonades which were pretty good on a hot Delhi afternoon.