From the desk of Chief Rumbling Tummy

on May 14, 2008
I guess one of the prerequisites of being a foodie or a food writer is that one should have a cast iron stomach. Mine isn't. So it goes under every now and then. As it has been now since last Thursday. I suspect some food which I had left in the car and then had for dinner to be the culprit.

I finally went to our doc yesterday. He was on a vacation and had left his father who is a seemingly stern doctor in his place. Senior's recommendations to me were quit strict - toast - no butter, curd mixed with rice, khichdi...and nothing else. A regular Dr No!

Well you can imagine how enthusiastic I was about these restrictions. In fact his son, our regular doctor rarely gives such stern restrictions.

Anyway his medicines didn't seem to work this morning. So I went to another doctor, this was Dr Miranda, a genial Christian lady, who lives in this amazing bungalow on the way to Carter Road. She was the exact opposite of the fierce doctor of the previous night. Her advise was more practical - ideally eat home food, or at least cooked food versus salads, no chillies, no problem with non vegetarian stuff as long as it was well cooked. Plus she kept smiling which was a welcome change from the previous evening's scowls. What's more she gave me a recipe for pork spare ribs (remove fat and pressure cook with onion and garlic paste with mustard sauce and lime juice)! Apparently she loves cooking and her son is studying in a cooking course. So now you know who is going to be my personal doctor.

I am off to Delhi for a day trip tomorrow so I hope her medicines work.

Yesterday I did manage to drag myself and make myself a palatable dinner which met the first doctor's restrictions. I made khichdi the preferred Indian food during sickness, religious festivals and, in Bengal, in the rains. I prefer my khichudi to be a bit dry versus the slightly more liquidy version.

Here's how I made it. I roasted moong daal (pulses) on the pressure cooker. I then added a bit of oil to it and added a tea spoon of chopped onions, half a chopped tomato, chopped ginger and a tea spoon each turmeric and cumin powder and salt. I then added a potato chopped into two and presoaked rice where the rice was twice the amount of the daal. I then added some water and whole bay leaves, cinnamon and cardamom for fragrance. I shut the cooker and cooked it for 3 whistles and simmered it for another seven minutes.

The result was quite tasty and brought me some cheer. 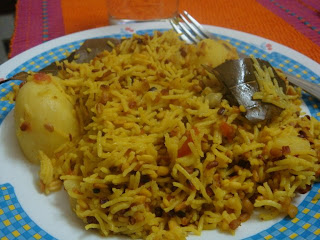 Kalyan Karmakar said…
thanks. Dr Miranda's magic potion seems to have worked compared to that of Dr No...the no chillies restriction has made us more inventive. kainaz has made a very nice potato dish in cumin which I plan to have tonight. I made a roast chicken with barbecue sauce and lime sauce which I had for lunch which turned out pretty well
16 May 2008 at 18:15