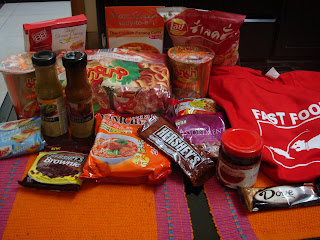 How do you make it out if someone is in love with a foodie?

Well Kainaz (also known as 'the wife') was in a Bangkok for a couple of days. It seems she spent almost all the time there running up food malls picking up stuff for me. And I love the stuff in Thailand. These are some of the stuff she picked. The lot is slightly depleted as I'd already had some of the cup o noodles and two of the Dove chocolates (hazelnut and fruit and nut) which she got. Note that the picture does not include the other tee shirts that she picked for me but the 'fast food' one seems to be designed for me.

We had the Hershey's Brownie, which is in the corner of the picture, yesterday. It was unbelievable rich and tasty. I would savour each bite as long as I could as there was only one, you don't get them here AND the two of us were sharing it.

The packs in the picture below are 'Mama's noodles'. We discovered this in our first trip together to Thailand. We just love these Tom Yum flavoured cup o noodles. I've tried their pork version but didn't like it too much. This time Kainaz got a duck po version which was quite tasty too. We have tried various other cup o noodles which just don't measure up. The taste of Mammas take me straight back to the streets of Bangkok. 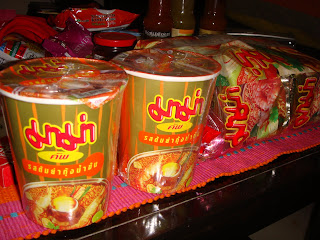 I am also looking forward to trying out the sauces she got in stir fries and noodles. 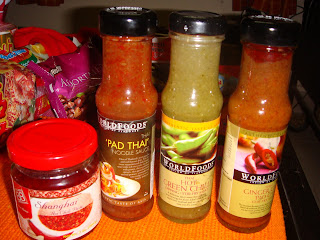 k said…
Now that I have scouted up and down Thailand to get the foodie's goodies, can you please find some place to store them (preferably in your tummy). Currently they're been shunted from the rocking chair to the Futon!
11 May 2008 at 16:16