on May 24, 2008
The other day I was at a conference whose theme was 'Spoilt for choice'. The basic premise being that the Indian consumer is spoilt for choices like ever before.

Well whoever came up with the theme had not tried to eating out at Bombay over the weekend. I had recently written about the lackadaisical service at JATC on Sunday mornings. Well, it's the same at most place. A colleague recently told me about her disappointing experience at China Gate on a Sunday night (her husband and uncle had beer out of a bottle as the vodka glasses did not seem clean). Last Saturday Kainaz and I went to Candies to pick up lunch. We were both quite hungry and tired after a busy morning. There was a sea of humanity at Candies, a bit like a Kumbh Mela. The staff was at sea too. I don't know why they don't plan something better like the multiple counters at McDonalds given their crowds. We figured out that it would be impossible to get anything there.

We needed to go to a continental place as my stomach was under weather the. This ruled out Indian or Far Eastern places. We did not got to Bassilico as they too have a long waiting period on weekends.

So we decided to try our luck at Red Box at Turner Road, Bandra. And we did get lucky. We got immediate seating as there were just two of us. Some larger groups did have to wait though for tables.

The place buzzing but the food came very quickly once we ordered. This was a big relief as I was collapsing with hunger by then.

I had a chicken Paella. They had made the Spanish dish quite nicely. It was reasonable bland (I was still under Dr Miranda's 'no chilly' instructions then). Yet it was very well flavoured and tasty. The abundant use of saffron gave it a nice Indian pulao'ish taste. So it was perfect for me. It was suitably European and therefore non spicy which suited me. At the same time it had an Indian taste which I was craving for after a week of careful eating. The chicken pieces were quite succulent too...all leg pieces I think. While the cell phone photos don't do justice to this but the rice was long grained and separate just the way I prefer it to be. 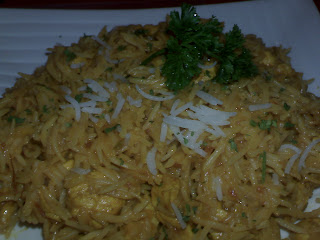 Kainaz had a fish dish in white sauce. I think the name started with 'r'. The sauce was very well flavoured - creamy but yet a bit tangy. It had some sort of chopped nuts, probably almonds but tasted really good. I kept dipping into her plate. The garlic bread accompanying it was quit good too. 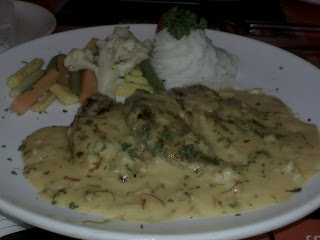 The two dishes plus a diet Coke (Kainaz, not me) and a strawberry ice tea came around Rs 550 (14 USD)... quite different from the Rs 1400 for a similar number of items at TGIF.

The service was prompt and efficient despite the heavy crowds and the food was bloody good. In fact we have eaten there in the past too when we found the food to be pretty good so the quality is consistent.

In terms of ambiance, the crowd is young and lively...the music is all 'boy band'. The decor is a mix of red, black and kitsch. Check out the table mat below 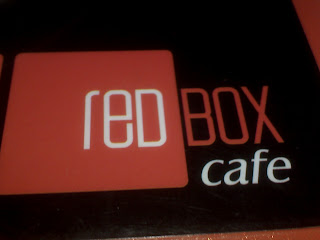 Kalyan Karmakar said…
Given the crowds I am not sure whether it is that underrated but i know what you mean...its still not a cult place...at least in my age group
25 May 2008 at 17:09

Scarlett said…
It's not a cult place. It's not a place one goes to becoz people one knows have referred it to them. You usually wander into it either out of curiosity, or becoz you're in the vicinity & you need food..and then u end up going back coz u realize it's decent food at reasonable prices.
26 May 2008 at 12:19

Kalyan Karmakar said…
@Scarlett: not 'cult' definitely. Bandra 'cult' places would probably be Out of the Blue, JATC (headaches notwithstanding), China Gate, 5 Spice is Little Tiger (read up Brand Dynamics), Elco chaat, Crepe Sation (?), Candies (even if it is cult of one!)
26 May 2008 at 12:33