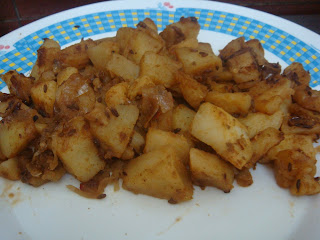 We have been manging quite well within the 'no chillies' advice from the doctors.

Kainaz made a delectable potato bhaaji. She boiled the potatoes first and. She then sauteed the some cumin (jeera) seeds in just a tea spoon of oil and then added some chopped onions to it. She then added the boiled potatoes which she cubed and then tossed it along with a bit of ketchup, jeera powder and salt. It was quite yummy. 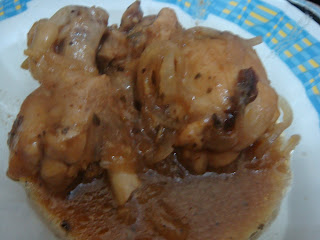 I called for 2 chicken legs one night. Added barbecue sauce, lime marinade, ginger paste and salt and put the whole thing in the micro for about 25 minutes. A nice sauce was formed thanks to the marinade and the chicken's natural juice.

I took mine to work and it tasted pretty good. Kainaz had it at night and seemed to like it too.