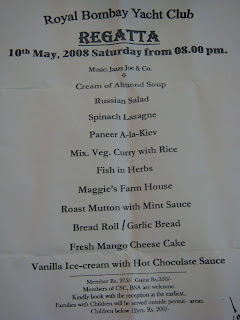 There is nothing like the heady mix of great company, great food and great surroundings... and it all came together for us last night.
Kainaz ('the wife') and I were at Jamshed Uncle's club, The Royal Bombay Yacht Club, yesterday. Jamshed Uncle is a good friend of Kainaz and he came into my life as a part of her trousseau. He doesn't like being called 'uncle' which is not surprising given that he is more active than most of us! Amongst other things, he is an active sailor now, having learnt it after he retired. Uncle J has hosted us to many a memorable meal at the club. 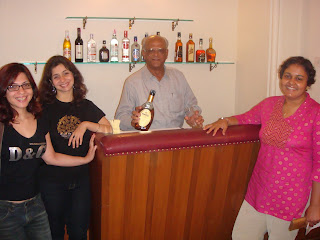 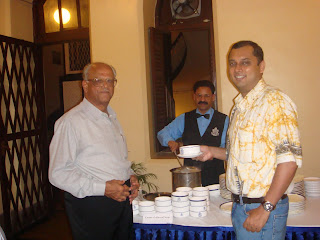 Our host for this evening though was Shahazad. We met him during our last dinner with Uncle J. His claim to fame was that he had broken Uncle J's record of the most sails in a season. Yesterday he was celebrating the fact that he had just become a full time member of the club. As you can see from the picture below he was mighty pleased about this. 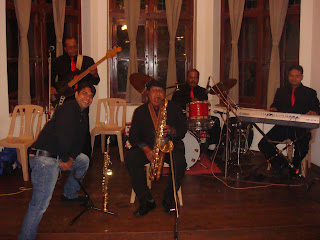 Bringing up the group was Rita, a close friend of Kainaz from her post Wonder Years (the two women in black) and her friend Janice. Janice was instrumental in getting us all onto the wooden dance floor later in the night. 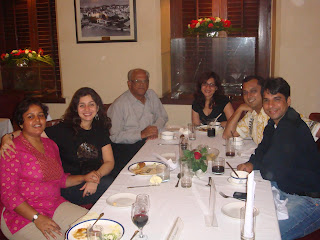 We had a lovely evening of relaxed conversations and even the odd dirty dancing. 'Dirty' as defined in Jane Austen's era which the club seemed to belong to. The live band played music from Sinatra and his ilk... Sultans of Swing was the most modern song that they played. 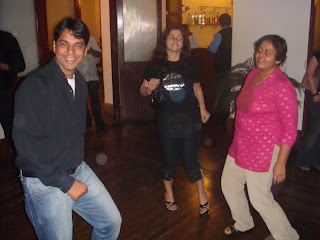 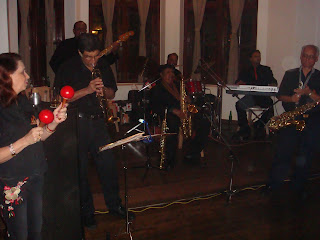 There is a part of me which yearns from the langurous pace, the fomality, the grandness and the sepia tones of the past. The Royal Bombay Yacht Clubs brings this alive. Check out the weighing chair in the photograph. Legend has it that one of the British Queen's (Queen Victoria I think, not Freddy Mercury) weighed herself on this during her visit to India. 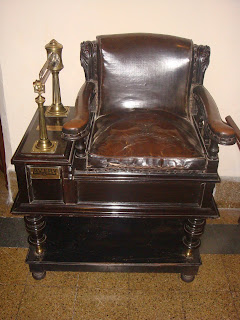 The highlight of the evening for me was Uncle J smuggling us into the kitchen. And what a kitchen! It must be bigger than most restaurants in Bombay. There was a different thrill to seeing the kitchen gearing up for the banquet. Seeing the food being put together held the promise of a memorable meal coming up. Check out the lamb and the bread rolls. 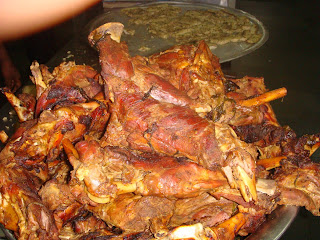 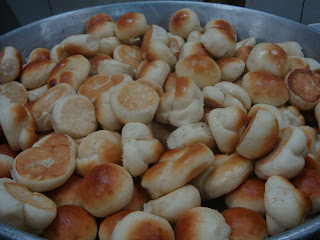 One hardly gets to meet those who put in all the efforts in the kitchen to make our meals memorable. Seeing their enthusiasm I knew I had a hearty meal coming up. 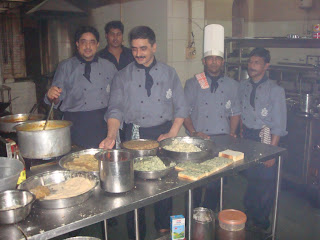 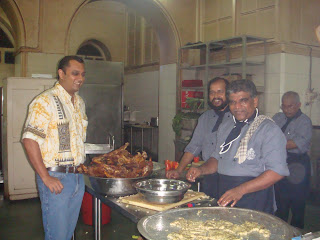 The food? I have rarely had such excellent food in a buffet. The fare was continental. We started with the almond soup which is a particular favourite of Uncle J and me. It has a nice comforting feel to it. The lamb was particularly succulent and tasty. Its sauce was nice, brown and barbecue'ish. The chicken (sliced with stuffed cheese) was ever so delectable and well flavoured. The Thai vegetable green curry was an interesting mix of tanginess and spicy heat. I quite liked the garlic bread too. Kainaz loved the mango souffle (labeled as a cheesecake) and threw her diet hang ups to the winds and had two servings of it. I relished the vanilla ice cream and chocolate sauce, an old friend of mine. 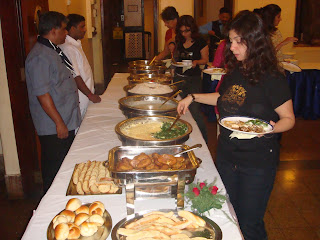 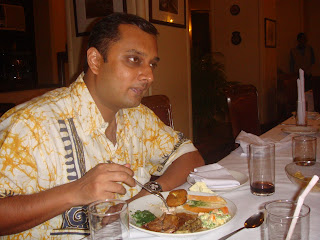 sefa firdaus said…
what a nice weekend you had :)