on June 04, 2008
The best thing about the trip home to Calcutta was the time one spent with family. And I must confess that food formed a big part of this. This is one thing which hasn't changed right from my initial trips back when I shifted to Bombay ten years back. And it helps that Kainaz loves the food too.

My Mom just disappears into the kitchen once we arrive. Which is why there are no photos of her here. But meal after meal we would get our favourites such as her prawn curry, fish curry, alu bhaaja (potato slices fried in a bit of salt, turmeric and besan/ gram flour), pulses with fish head and so on. This picture tries to capture a fraction of the spread. 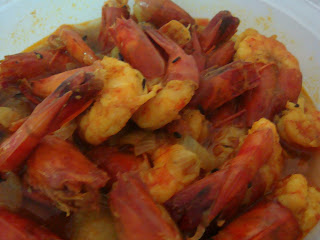 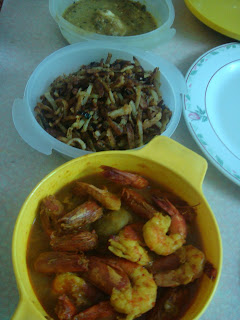 My grandmom who we call Didu (short for Didima, the Bengali word for mother's mother) is the acclaimed cook of the family. Though she is growing old she still wants to make all my favourite stuff. My mother had to be a bit stern (so that she doesn't over exert herself) and finally allowed her to make breakfast but not a full blown lunch. She made luchi (a flour based bread fried in oil) and chholar daal (Bengal gram). These are two of my favourite dishes and were one of the few Indian dishes I would have when I first came to India as a kid. Off late I have managed to make a decent chholar daal but making luchis are beyond me. 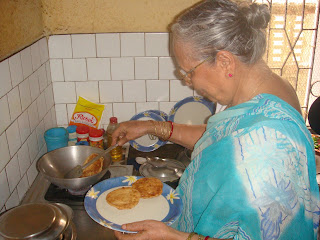 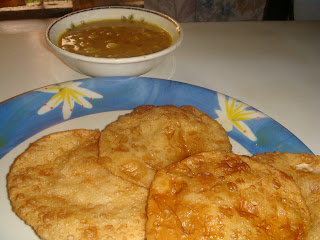 To know whether Kainaz liked it, take a look at her picture with Didu after she saw the food. 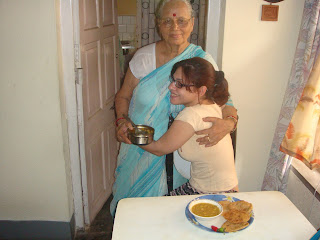 One of the sweetest moments was seeing the look of excitement on my grandparents' faces when we gave them some jelly sweets which we had got from Matheran. They looked more like seven and eight year olds rather than their ages of seventy and eighty years plus. The third stop in my Calcutta journey is at my aunt's house. She and my uncle are one of the most generous hosts I have known. The food always keeps getting replenished at their table. This time we had some nice local Chinese food there. Plus my favourite mishti doi was there while Kainaz got a stash of chocolates as she is not fond of Bengali sweets. 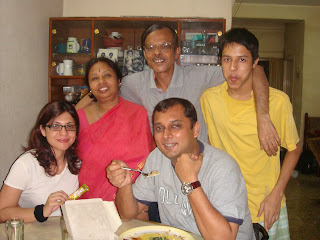 Then there is my kid brother who is all grown up and insists on treating us (this time to pizza and rolls and pastries). This time I did get a chance to introduce him to the joys of Pringles which as you can see he has taken too.

I am back In Bombay now with enough happy memories to fuel me till I make my next trip to Calcutta.