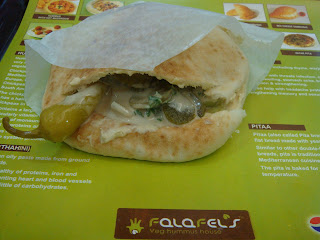 There is a relatively new Lebanese food chain - Falafel - which has opened at various places at Bombay. The catch? They only serve vegetarian food.

We went to the outlet at Colaba near Regal as we wanted a light bite before the movie.

I had a basic hummus which was served with pickled vegetables in a pita bread. It was fairly tasty and light. It cost just Rs 50 or a bit more than a dollar. And I guess was healthy too. It satisfied my pre-movie hunger and yet left enough space for my dinner at Churchill later at night.

I think I will definitely go back.
Mumbai highs