on July 19, 2008
I remember Mocambo as a slightly dingy Irani restaurant in Mumbai's commercial district, Fort.

Kainaz and I used to go occasionally for lunch when we were working at Nariman Point. Nariman Point, Fort are parts of South Bombay and are referred to as 'Town'. A lot of the action in Bombay has shifted to the central Mill area and the suburbs with offices moving away. A large part of South Bombay, especially Fort, looks frozen in time with its array of old buildings from the British period.
Mocambo represented this era. It's ground floor was not air conditioned. Prices of food there was cheaper and it had 4 to 5 tables. We used to sit at the upper floor which was air conditioned and therefore was slightly more expensive. The ceilings were low, the walls were grey and the lights were dim. It had a slightly gloomy air but at the same time was a pleasantly cool respite from the Bombay sun. At lunch hour it was full of the office crowd. The fare was primarily Indian. I don't remember what we used to eat but Kainaz says that we used to eat mutton do piaza (mutton in a thick Indian gravy with deep fried onion/ 'piaaz').
Well, Mocambo, has moved with the times. It has had a makeover. The bare, non air conditioned ground floor, is air conditioned, the walls have been decorated with cartoons and grafitti and it has been merged with the upper floor through glass walls. The upper floor still has a low ceiling. But gone are the grey walls. In their place are bright white walls with the same grafiti and transparent glass walls which make it more well lit.
I went there recently with a couple of juniors from office after a fairly satisfying client meeting. I was feeling quite proud and paternal as the client had praised the work of my juniors. So we went there to celebrate.
The place was buzzing. Gone were the grim office crowds of various income brackets who would, depending on their budgets, take the cheaper non AC section or pay the premium for the air conditioned section. In it's place was a comparatively more well heeled and younger crowd. In fact we had to wait a while to sit. There were a few modern touches such as the fluorescent board for the specials which had replaced the earlier blackboard. The local London Pilsner beer of yore was replaced by the newly imported Tiger Beer from the Far East. I also figured out from the table mats and the pastries that Mocambo was owned by Churchill, my favourite continental place at Bombay, as the pastries were the same. 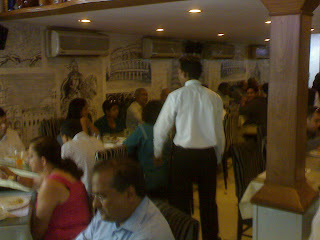 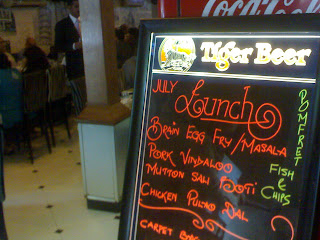 The Indian menu was replaced by a continental pasta (average price of Rs 250/ USD 6.1), steak and sandwich menu. I saw some of the food which people ordered and it looked pretty good.

Tucked in a corner was a table stand which listed a few Irani/ Parsi dishes. My colleagues wanted to try that out. So what followed was a smorgasbord of good Parsi food. I did the ordering of course. And i am sure my choice of dishes would have done my Parsi in laws proud.


We started with 'bheja cutlet' (brain cutlet). The brain of goats is a delicacy in the Parsi and Muslim cuisines of Mumbai. The most popular form is 'bheja fry' where the brain is smashed, deap fried with onions, tomatoes, chillies and garam masala. I chose the cutlet as the rest of our dishes were gravy and masala based.

One of our two lunch mates, R, had fish for the first time in her life in a recent office lunch . Today was the first day she tried brain or bheja. She loved it! I felt like one of those people in college who would lead one 'astray' by introducing one to forbidden pleasures


Well, the brain cutlet was very nice. It consisted of brain mashed (the white bits in the cross section in the photo) with a bit of potato, seasoned with garam masala and fried in an egg coating. The garam masala sharpened the taste of the white, wobbly meat. 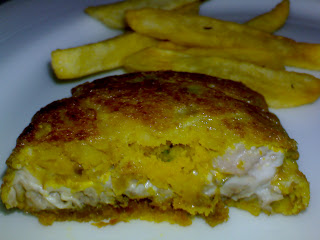 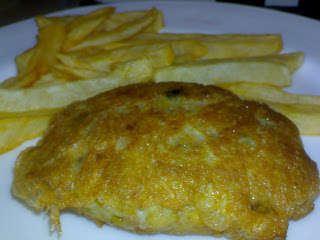 We then had a sali kheema. This was a minced meat dish made with spices and had peas in it. You had this along with 'sali' or potato straws. The kheema was nice and spicy and tasted good. We had this along with the local Bombay bread, pao. Kheema and pao is a classic combination. 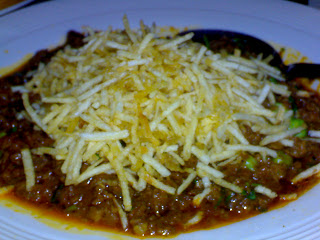 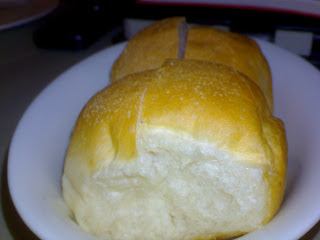 We followed this with the legendary Parsi dish - dhansak. This is a brown coloured gravy with mixed pulses, meat and mashed vegetables. As you can see it doesn't photograph well but is very tasty. You have this with brown rice which is seasoned with caramelised onons. At Mocambo they gave a couple of little kebabs with the rice. The dhansak at Mocambo was quite good and I am sure Kainaz's folks would have approved of it. 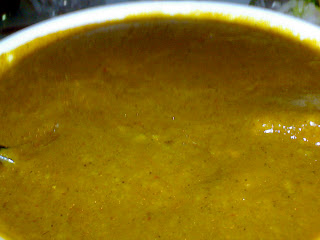 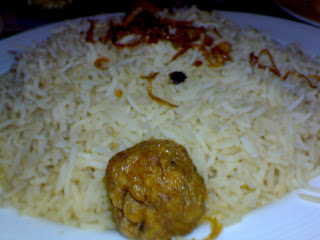 By the way do not expect to get dhansak in any auspicious occasion for Parsis. it is traditionally served at funerals. Dhansak and beer followed by a good siesta on a Sunday is the idea of heaven for many Parsis.

Well our meal of 3 ice tea, 2 bheja cutlets, one sali kheema and 2 mutton dhansaks cost us Rs 650 (16 USD) which was quite given the quality of the food and the nice ambiance. A better bargain than Britannia I would say though not as quirky

PS. Mocambo is not to be confused with the Continental restaurant of the same name in Calcutta

Scarlett said…
Seems you went to Mocambo after a very long time. They've been like this since I first went there, which must have been some 2-3 years ago!
Tried the Mocambo in Calcutta. It was strictly OK, I thought.
Btw..I have managed to succeed in my quest to find a decent Chinese restaurant in Calcutta. It's called Tung Fong! I'm sure you know :) It's not as good as 5 Spice obviously, but it will do.
Had a sizzler at Peter Cat yesterday. It sucked!!
21 July 2008 at 11:14

Kalyan Karmakar said…
yes, it's been years. Not since I got married I think.
On Mocambo Cal go back and have the devilled crab and the fish a la diana...then lemme know
I'd been to Tung Fung a couple of times with my mom and bro. She loved the buffet and the unlimited prawns (no Bombay buffet has prawns) I liked the momos too.
I remember folks ordering sizzlers in Cal at peter cat etc where the sizzle would stop by the time it came to the table...and I saw this soon after I was acquanited with real sizzlers at Kobes and Yokos in Bombay
21 July 2008 at 13:40

Scarlett said…
I swear! After Yoko's & Kobe's, Peter Cat sizzlers are a joke! And people here swear by it! They don't know what they're missing, man! Thankfully, there's a Kobe's at City Center mall. Haven't tried it but hope its as good as Kobe's in Bombay.
21 July 2008 at 14:40

Kalyan Karmakar said…
@Scarlett. I can see you are going with the wrong people. The thing to eat at Peter Kat is chelo kebab.

Unknown said…
Well, I have almost made up my mind that the next time am there, we will go to Mocambo for lunch.... Now wat can be a better combo than Tiger beer, mutton cutlet, sali kheema and I assume caramel custard as well :-)
21 July 2008 at 23:00

Unknown said…
....The only time I had been there was around 4 years back with couple of frds for dinner... One of my frd ordered a slush, and we were struggling to find ice in it :-)

Kalyan Karmakar said…
@Kashi: The menu u described is perfect. Can't wait. what will Nihar eat though?
@Scarlett: My mom who is quite enamoured by Kobe's bandra was disappointed by the Cal one. Its been a while since i had chelo kebab. I grew up having it as my Mom picked it up while we were at Iran
25 July 2008 at 13:15