on July 30, 2008
After some seven years I recently handed over the ladles to our maid, Banu. We have a bit of a Kung Fu Panda thing going there as she is talented and is extremely enthusiastic but needs to be trained. Most of the things she turns out are quite nice - including Bengali recipes and a few Chinese and continental stuff with ready sauces. But she recently massacred two very delicate fresh water fishes treasured by us Bengalis - pabda and eelish on Saturday night and Sunday afternoon. Both were without salt and she had put onions in the eelish curry which is a culinary sacrilege. In fact I was planning to make the eelish myself but the poor thing took the initiative to make it when she saw it in the kitchen.

Anyway after 2 lousy meals I took matters into my own hands on Sunday night. I decided to make my pork hakka noodles. The only problem when I make it is that sometimes the noodles get squishy and over cooked. Kainaz hates that and gets a bit traumatised and emotional, to put it mildly, when confronted by slushy noodles.

Smarting from my own fish fantasies being spoilt I made a special effort to make the noodles a la dente (firm) and was quite succesful I must say. 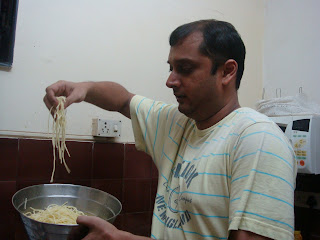 Ok here's how I cooked it:

The result was what Kainaz said were the best noodles I had ever made. In fact earlier in the day we were at, where else, Candies. Over there we saw Kylie Kwong making noodles in a wok and Kainaz told me that she wanted my dish to look like what Kylie was making. And I dare say it did! 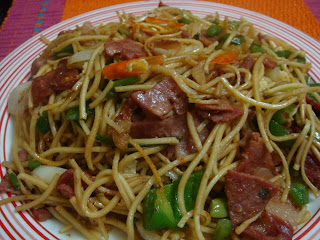 The following are some of the influences on my hakka noodles:

So there you have the secret to my pork hakka noodles: oil, pork, eggs not what the doctor would approve but I am sure Anthony Bourdain would.

Kalyan Karmakar said…
@Scarlett: the first time I had paabda and realised it was a delicacy was during the Saturday lunch at my first job at IMRB Calcutta
@Kashi: next time definitely
31 July 2008 at 18:46