When we were kings: The Presidency College Canteen

on July 27, 2008
One of our regular readers was reminiscing about her college coffee shop, The Daily Grind, in the US. Coincidentally Bunty, a friend of mine of from high school, college (where we became really thick) and post grad days called me the same day and we spoke after some nine million years.

This set me thinking about my college days at Presidency College in Calcutta and of course, food memories played a large part. 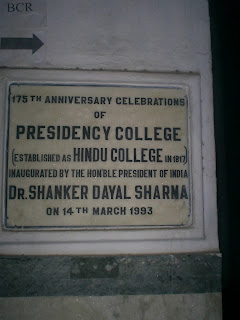 We had all heard of the hallowed Indian Coffee House opposite Presidency College at College Street before we joined. The place was legendary and was considered to be an intellectual hub with famous Presidencians (Satyajit Ray et al) over the years having long discussions on cinema, politics, the Naxal movement and so on over endless cups of black coffee called 'Infusion' and cigarettes.

The action had shifted to the College canteen known as Pramod da's Canteen (after it's owner) by the time I had shifted there. The canteen was a fairly bare room behind what was called the 'Main Building' (in the photo below). Most of us were quite strapped for cash in those days and we didn't have the defence budgetlike allowances of today's college kids. 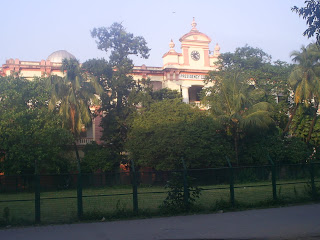 So 50 paisa teas were the order of the day then. I am a coffee drinker so had to shell out Rs 1.50 (the amounts are so small that I won't even try to convert them into US, I am talking of 1 or 2 cents here). A soft drink was a luxury. Though sometimes I would ask the girls in my class to treat me to one after a rare game of soccer. There were 3 guys in a class of 21 in sociology so we did pile on the girls occasionally. I would sometimes buy a cutlet and have it between two thick slices of bread which was quite a fill at Rs 4.50. Pramod da was also famous for his once a week mutton rolls. It was rumoured that one of the college stray dogs would disappear the day he would make these.

The college canteen was really the hub of our college life and we would keep going there in between classes. I went there once in the end of 2006 when I had gone to Calcutta on work. It was a Saturday and college was empty. I had my Cinema Paradiso moment as I returned there eleven years after I had passed out. I could sense almost all my close friends around me as I was transported back to some very heady times... don't be taken in by my big grin in the photo below, it was a very lump in the throat moment. 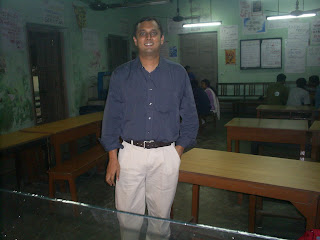 The canteen was much more than a place to eat. There was a halo around it and it. There were two sets of people at college. Those who went to the canteen and those who didn't. I remember that it took us a few days to muster our courage to go there after we joined college. And there was no coming back once we stepped in... we would while away hours making new friends, fretting on fragile affairs of the heart, sharing our career anxieties, discussing world politics and the growth of the BJP, we would watch India snatch defeat from the jaws of victory in many cricket matches in Pramod da's tiny black and white telly.

And, of course, there was Pramod Da (in the photo below) who sas a link from the past whenever I go back. 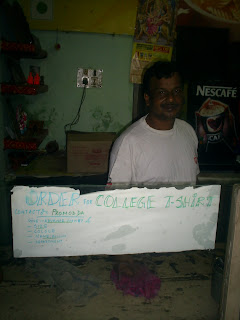 Of course a post on eats during college days wouldn't be complete if I didn't mention the unusually white mishti doi of the sweetshop, Putiram, the 6 Re chicken stew of the YMCA canteen outside the college square pool and the food boxes that we volunteers got during the colleges Fests and the celebrations. 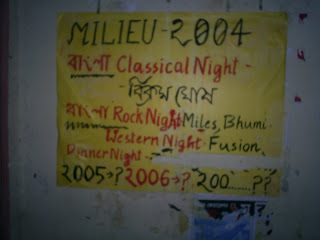 Kalyan Karmakar said…
@Jessica: Ha! Ha! we were a bunch of shameless Jugheads I guess. For some reason though I think the girls had more spending money than us boys. In my defence, I have always picked the tab when I met any of them again after I started working
1 August 2008 at 01:15

Anonymous said…
Oh wow, what trip down memory lane! Just like you, I am a coffee drinker, and loved the mutton rolls, till the rumors about the stray dogs surfaced!!

Hey, I remember the fear with which some of us (I think it was a collection of Socio and Eco folks) approached our canteen, the first time we actually went there. Lovely memories.

Finally, Kalyan I can only imagine how it would feel to be alone on a Saturday, 11yrs after we had graduated, to be at the Canteen. I would have cried!
12 December 2008 at 19:32

Kalyan Karmakar said…
@debanuj: Tears? I had the lump the size of polaris missiles in my throat!

Yes I remember how nervous we were to go to the canteen and we went there only after a few days in college. Of course never moved out of it once we lost our canteen virginity

btw remember how the second and third yr socio girls fought about who got to rag us on the first day of college?

Sundries said…
Good job Kalyan! I can feel that lump forming, too. Actually, Pramod da's canteen was never really about the food, was it? Though I do remember his 'dim er chop' (half-a-boiled egg rammed into an indeterminate mix of onions and other unrecognisable bits of vegetable and the whole thing fried to a rock solid texture). Would you believe I'm actually drooling at the thought? It seemed truly hideous then, if very filling.
23 June 2009 at 22:23

Shaswati said…
This sure is a small world and you seem to be one of my juniors from college! Among the various goodies to eat during college days how could you forget the "gorur mangsher roll" for 1.50 rupees from Kalabagan, maangsher chaap from Savoury (surjo sen street) and chowmein at Tasty's?! Po..da's canteen was more for tea and coffee and occasional cutlet when the dogs went missing ;)
Yes, now if you go on a Saturday you won't find a soul. In fact, even on other days the students only frequent it during lunch break! It seems they do not intend to do Canteen honours unlike us, anymore...
28 July 2009 at 11:12

Kalyan Karmakar said…
Hey Shaswati... I was in Presi 92-95, Sociology...actually hadn't made it to Kalabagan and Savoury but I did miss mentioning:
- Tasty's chowmein and for some reason, i reason I remember the fork
- Paradise shakes and drinks...this was after presi though when I was at IISWBM next door but had trong ties with Presi
- Pramod da's pulao and magsho

Sad to hear about the canteen. We used to run all the way from EPL building to snatch a few minutes in the canteen in between classes
28 July 2009 at 12:52

Unknown said…
Wow you do bring back all those memories from the days at Presi. I was there way back (from 1978 to 1981) in Poli Science and enjoyed every bit of it. I remember dreading going to the canteen just because the guys would ask us girls for a treat. The Coffee House was our most favorite haunt.
Their Moghlai Porota was to die for.
By the way did you have Dr. Prasanta Ray as your head in Socio. He was my favorite profesor in those days.

Great to hear from you. I guess we men don't change :) Coffee House had become a bit passe in Presi by the time we entered. Still remember their 1.50 Re Infusion and the three hours that they took to serve this simple black coffee.

P R was our HOD and I was a big fan of his. Was he bald then too?

Gia Fernandes said…
Nothing beats the magic of returning to a place that's always been a part of you. Lovely memories!
14 March 2014 at 22:11