The Prodigal's day out

on July 07, 2008
I had written quite sometime back about what I eat when I make a trip back to Calcutta http://finelychopped-k.blogspot.com/2007/10/dozen-phuchkas-followed-by-mutton-roll.html

I recently got to see the Bombay equivalent of it when my friend and ex colleague, Kashi, (in the picture below) dropped in from Dubai for a week. 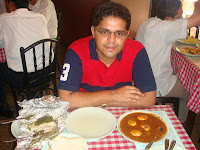 The two of us met up with another friend and ex colleague, Nihar. Now normally you would expect such an occasion to be more about catching up with friends and reminiscing about old times.

However with two foodies involved (Kashi is a regular reader of the blog) the place where we would meet and eat assumed high importance.

Kashi had grown up in Grant Road in South Bombay amongst the Irani cafes and Muslim restaurants. So he suggested, or actually declared, that he wanted to meet at Britannia for Parsi food. This was fine with me as I am quite fond of Britannia and I had recently introduced Nihar to Parsi food over there http://finelychopped-k.blogspot.com/2008/01/there-is-no-love-like-love-of-eating.html Anyway Nihar (in the white shirt) is the quieter one so he sportingly sounded enthusiastic and came along with us. 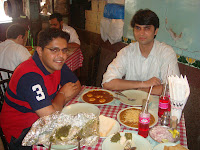 Luckily we got a table easily as it was a Saturday. The genial elderly owner came and took the order and again said 'good boy' when we ordered Raspberry, the favourite soft drink of Parsis. Now, I normally take care of the ordering when I go out with friends. In this case though Kashi took charge. He ordered sali kheema (so brilliant that I packed some for home), patrani machhi (served in an aluminium foil instead of the usual banana leaf), berry pulao (vegetarian for Nihar), caramel custard (I am sure even Nigella would have approved) and egg curry. Each item was well chosen and I guess Kashi did a good enough job of ordering.
Fans of Britannia's egg curry would immediately notice that the curry in the picture looks different from the normal. Nihar who had loved it the last time said so too. So I walked up the owners and said 'what have you done to the egg curry'. Well it seems that there weren't enough people ordering it so they have substituted it (yellow, coconut and nut based gravy) with the usual curry (tomato and onion based) from the other dishes.
Kashi had his fill of nostalgia as he giggled at the peeling walls and old advertising hoardings which are part of Britannia's charms. 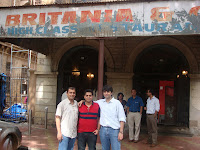 After lunch Kashi suddenly said he felt like a paan. A paan is an Indian post meal apertif/ digestive which is consists of a betel leaf stuffed with various spices and betel nuts. He wanted to go to a place called Muchhar Paanwallah (literally Paan seller with a moustache). which is a famour paan shop at Kemp's corner. 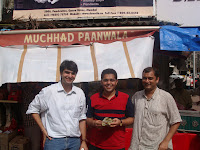 The owner is quite famous for the amount of money he has made from his roadside shop. Apparently there is a stampede of customers at night. As you can see from the picture of the attendant, the moustache is their signature. In fact the gentleman fluffed up his moustache before I could take his photo. 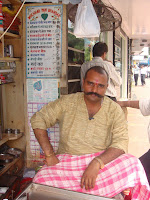 We went there and had something called a Lady's Special Paan. Now I don't know what that would mean in Pat pong but here it was an enormous paan - a betel leaf stuffed with coconut shavings, spices and chilled in a fridge. The picture below is a picture of the paan and not a blood splattered grenade. 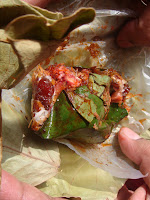 The look on Kashi's face says it all I guess. 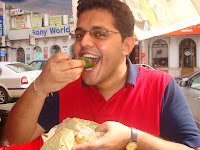 Kalyan Karmakar said…
@Jessica - Hi, we didn't take pictures of the food this time as I had posted them in our last trip there. You'll find them in the following post

Anonymous said…
This reminds me of our trip to Britannia in Jan 2008 when we had gone to present to HPCL.
Awesome food! :)
A funny tihing happenend that day -U, Nihar and Me were wearing shirts with similar style of stripes (but different colors).
In the morning, every1 in office was asking Nihar & me whether we 3 had pre-decided on the dress code!!
Whenever i wear that shirt, it reminds me of our outing at Britannia!!
7 July 2008 at 19:09

Kalyan Karmakar said…
@Pavan: proves that it is often the company you are with which makes an occassion special
8 July 2008 at 14:34