I have always loved egg yolks or deemer holudh (egg yellow) as I would call them as a kid.

One on my earliest memories of yolk is that of my grandmother (dad's mother, Thakuma) introducing me to poached eggs when we had to come to India. I just loved the runny feeling of the yolks and had at least two or three poaches. I think I was six or seven years old then. I also loved eating half boiled eggs in our English egg cups after we shifted to India. As a kid I loved nudging a toast into the egg and seeing the yolk run on to the bread. Over the years I became fond of the egg curry my mother and her mother (Didu) made. I developed this peculiar way of smashing the yolk in the curry and relishing the creamish paste. I then started making omelets at home in Calcutta and then when we rented an apartment at Bombay. I used to keep my omelets soft centred and loved biting into the mushy yolk. I also developed a fondness for the egg salad at Just Around the Corner. Again it was the creamy interplay of egg yolks in mayonnaise which gave me a high. My most recent favourite is the sali par eendu which Kainaz makes which literally translates as 'eggs over fried potato straws' http://finelychopped-k.blogspot.com/2008/01/importance-of-being-egg.html Can't imagine that without the yolk. Check it out in the picture below: 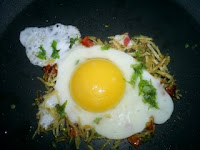 Now, if you noticed, I have written a lot of this post in the past tense. And that's because there seems to be no place for egg yellow in the racist world of good health. Why racist? Well doctors and dietitians have this 'whites only' policy when it comes to eggs. Apparently egg yellow is fattening and, more importantly, bad for cholesterol.

Egg whites are apparently protein rich, filling, they do not up your cholesterol scores AND are frigging tasteless. Try having an egg white omelet with its needy, cloyee, insipid taste. It gets stuck in your teeth as it it quite brittle. Or try doing what I have tried to do bravely for the last few mornings - have chopped boiled eggs with tomato, pepper etc or worse still and egg white brown bread sandwich. Torrid!

I chanced upon an episode of Nigella Cooks on telly the other day. Nigella Lawson was making a dessert where she, listen to this, strained out the egg whites and used only the yolks!!! What a woman.
Food musings

Jessica@Foodmayhem said…
I'm with you all the way!! Yolks, especially runny ones are the bomb! In the winter, my favorite breakfast is a runny over-easy egg on top of oatmeal.
11 July 2008 at 18:28

Shubh said…
Similar experience with eggs except mine were during hostel days when eggs were the main stay of the food chain. Over the years they have become a comfort food and the weekend has to start with a good egg based breakfast, which I cant have during the week.
White or Yellow, unfortunately I am partial to both
24 September 2008 at 16:43