To the promised land at Moshe's 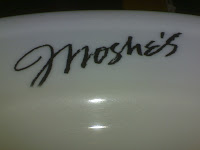 We'd gone to Moshe's the other night to commemorate a special day.
Mosh's is a fairly popular restaurant in Cuffe Parade, Mumbai, which is owned by the Jewish chef, Moshe Shek. I am not sure if he is an Indian or an Israeli but he is a celebrity chef and writes quite often in local newspapers.

The ambiance was quite nice with brick coloured walls, glass work designs on the walls and a wooden chandelier. The place was just right for a special dinner. 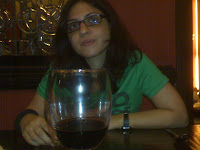 As was the food. What we had was more Arabian than Jewish though. We started with a mezze platter. We had a combination of four dips - hummus with chicken bits, yogurt based goat cheese, potato braska and gnochhi (they had fancier names which I don't remember). We had these with pita bread. Each dish tasted awesome and were fairly unique taste experiences. 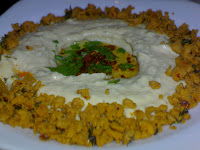 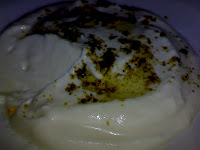 I had a Grover red which I think was a bit too dry for me and I landed with a headache the next day. 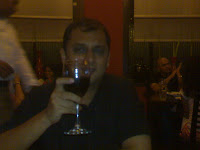 For our main course we had a Moroccan lamb which consisted of very tender lamb bits in a slightly sweetish and tangy brown gravy. This was very tasty. This came with a pulao which was similar to an Indian one but had green moong/ pulses in it. Both of us loved the food. 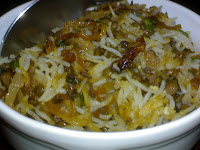 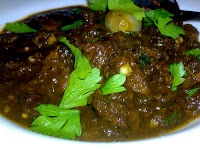 The presentation of the food was very attractive. We didn't order pasta but we saw that some others had and they had even made even the pasta look more attractive than normal by garnishing it with vegetable and cheese shavings.

I had a sugar free apple pie after dinner which was quite tasty. Kainaz had a sugar free chocolate pastry which I felt could have been sweeter. They gave some sugar free vanilla ice cream with this which reminded me of the ice that would accumulate at the base of our fridge in the pre frost free days.

The entire meal - 4 plate mezze, 2 glasses of wine, a green tea, a main course and two desserts costs us Rs 1600 (USD 40) which I felt was acceptable for the experience.

After thought: I was quite bemused to see this pre-teen couple who were in the table beside us. They ordered a fondue and two plates of nachos. I am sure their dinner costed as much as all of Kainaz and my dinners out together when we were dating. Anyway they looked into each other's eyes, whispered sweet nothings and left after a while without eating anything. Criminal! The only good part was that the boy stank so I enjoyed my dinner much better once he left.

I am sounding like an old uncle. And the irony is we had gone there to commemorate eight years of being together.
Mumbai highs