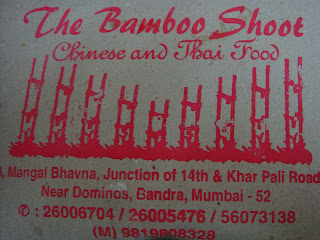 Bamboo Shoot at Khar was a place we used to order from when we had initially taken a place at Khar Pali and were yet to set up our kitchen. I remember being quite fond of their salt and pepper chicken there.

Somewhere down the line we reduced our orders from their as we moved to Pali Naka and had Tiffin, Jimme's Kitchen and later Mr Chow and 5 Spice.

Though I did order a couple of Thai curries from Bamboo Shoot over the years and quite enjoyed it.

Last night was a quite a wet night so we decided to order from Bamboo Shoot after quite a while. We had a Tom Yum soup which was nice and hot and spicy and went well with the wet weather. it really fired one up. And I was amazed by the number of prawns in it. 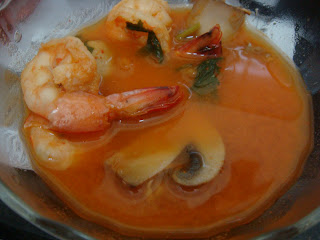 We followed it with a Thai green curry with chicken. This too tasted pretty good. I added a bit of honey chilly sauce and the peanut sauce which added to the taste. the chicken pieces were very nice - leg pieces I think. It went well with the steamed rice. I didn't care much for the bright green colour though and would have preferred the curry to be less thick. I also missed the flavour of fish oil, the green round bird chillies and the slivers of brinjal which you get in real Thai curry. Net net it was nice, but the Candies green Thai curry (which is lighter) works better for me. 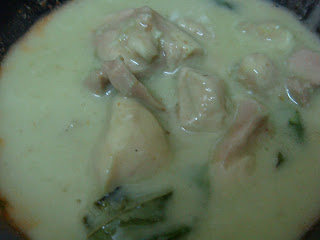 PS. Bamboo Shoot has extended their menu to Mughlai food too now

Kalyan Karmakar said…
The Thai food revolution hit India in the late nineties. I think the spiciness appealed to the Indian palate. The use of coconut milk was reminiscient of south Indian cuisines such as that of Kerala. However, it has not gained the popularity of 'Chinese' food though. The Thai food in India is reasonably close to what I have had at bangkok and Pattaya. Except it is not laced with fish oil and isn't garnished with Thai condiments such as the round bird chillies
19 August 2008 at 13:28