Drop everything and go there: Roast Tongue at Mocambo cafe

I had a taste of paradise yesterday.

I was at Mocambo at the Fort area of South Bombay after business meeting. Mocambo is on the way to becoming one of my favourite restaurants at Bombay.

I was with a couple of colleagues including a Goan. Goans are one of the most varied meat eaters in India.

We ordered an Ox's Tongue. It was out of the world! It was made in a continental, brown, garlic sauce which had a bite of garlic and herbs in it. The tongue was served as little cubes unlike at Infanteria at Goa where it is served as thin slices. (In fact the sauce at Infanteria is slightly more Indian with a faint taste of garam masala and the tangy taste of vinegar which is common to most Goan cooking).

The tongue meat at Mocambo was so sooooooft and succulent. Each bite was like sinking into a bed of feathers. It was heavenly! I just can't get over it. The dish tasted so good that I packed a portion for Kainaz for dinner. My Goan colleague concurred and said that he had never had such soft tongue. He said that the one's which they had were usually a bit more chewy. This dish is definitely a must have. The only caveat is that it is a form of beef which is a meat which most Hindus don't eat because of religious reasons. Else, the dish is definitely worth a pilgrimmage to South Bombay for. 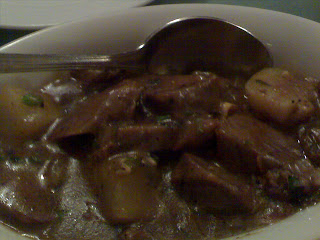 We sat upstairs this time but I preferred downstairs which is nice and bright and gives a feeling of a Parisian cafe.

We followed the tongue roasts with a Parsi pulao daal which was quite well made. The difference with the more famous Parsi dish, dhansaak, is that the rice has more masala in it and the meat is put into the rice and not in the daal unlike in dhansaak. The dhansaak rice in comparison is plain and flavoured with caramelised onions and is less colourful than the pulao rice. Normally pulao daal has chunks of meat in the rice. At Mocambo, they had put shredded chicken. The daal (lentils) is common between the two dishes - it is thick and brown. But in the case of dhansaak the meat is put in the daal while in the pulao daal the meat is in the rice and not dhaansaak. 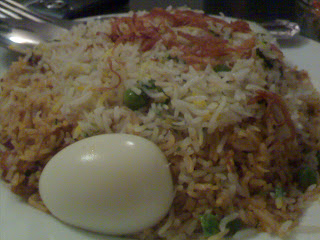 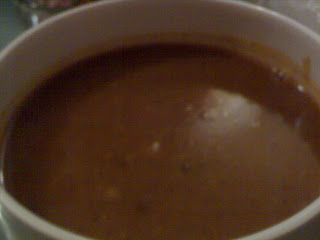 By the way at Mocambo they give you the continental menu as they are probably trying to push that. Both times we had to ask for a separate table card which listed out the Parsi and Goan items. Even the prices are not mentioned in this menu but the average price is cheaper that in the continental stuff. Most Parsi dishes here cost around Rs 100 (2.5 USD) while the continental main courses cost about Rs 250 (6 USD).

Anonymous said…
Have you had the bananoffee either at Macombo, or Churchill?

Kalyan Karmakar said…
@Another Foodie...I have eyed it for years but am yet to try it. Our favourite at Churchill was the gooey chocolate cake. Unfortunately this was not there the last time. Is the bananoffee banana flavoured?
8 August 2008 at 16:57

Kalyan Karmakar said…
@Jessica: Could be because tongue is probably more of British thing. I grew up reading about tongue sandwiches in Enid Blyton stories. I think Goans are one of the few communities who have it in India
8 August 2008 at 23:52

Jessica@Foodmayhem said…
Jewish delis and my Jewish mother-in-law serve tongue but haven't seen it in NY otherwise.
9 August 2008 at 04:17

Kalyan Karmakar said…
@Jessica...you know, as I read your post, I realised how little I know about Jewish food. I can't think of any famous Jewish dishes at all. Probably the only food associations I have are very thick sausages, kosher and once reading in Erich Segal's Act of Faith about how Jews don't cook on Sunday. I would definitely love to know more
10 August 2008 at 21:11

Jessica@Foodmayhem said…
That smoked salmon (especially on a bagel with cream cheese) is a Jewish thing....I'll try to do get Lon to do some Jewish food posts.
11 August 2008 at 18:09

Kalyan Karmakar said…
@Jessica...I didn't know that the smoked salmon bagel combo was a Jewish one. It is a wonderful, inspired combination. I love cream cheese. I wonder if it's a bit of a mid Eastern influence.
I have married into the Parsi community which I think has a lot of similarities with the Jewish community - close knit, gives a high importance to arts and crafts, formed the merchant class in India in 1800, 1900s, lot of big businessmen, philanthropists and visionaries, slightly insular and gives a prefence to marrying inside, originated in the mid east and came to India because of religious persecution, largely peace loving rarely get into controversies in the world at large, a much younger community than the Jewsish one though
11 August 2008 at 18:50