on August 23, 2008
I owe this post to two incidents. First, to an anonymous reader who had put in a petulant comment on my misspelling of his/ her favourite restaurant, Basilico. And who was later, kind enough to write about his/ her breakfast favourites there.

The second is to my waking up at about twelve noon after bringing in Kainaz's birthday the previous night. She was sitting patiently from nine in the morning. This helped because Basilico opens at 1230 and we headed straight for breakfast. As you can see from the rather scary picture below, I was yet to join the world of the living. 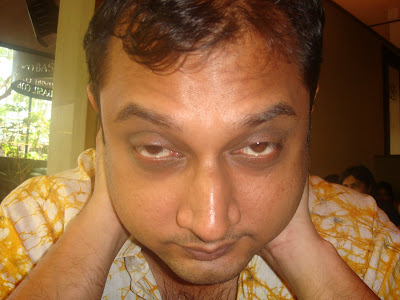 We started with a watermelon juice which Kainaz had and a banana milk shake which I had. The milk shake was a good pick me up for my drowsy frame and I then enjoyed the breakfast that followed. The shake had peach and melon blended in it along with vanilla and had a nice fibrous, creamy, wholesome feel. 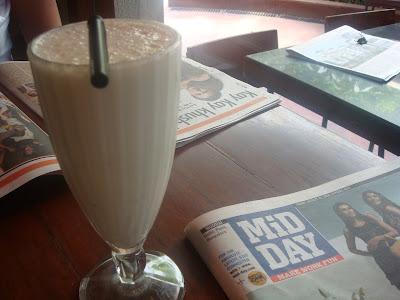 Our anonymous reader had suggested an egg benedict. However, the menu described this as eggs on a spinach bed. Now you can't offer that to any self respecting Parsi on her birthday. Or a Bengali for breakfast. So we had a chicken and egg burjee which was an interesting, spicy scrambled egg with tiny chicken mince bits interspersed with bites of chillies. It was served with brown bread toast and butter but was changed to soft bread at our request which was nice of them. 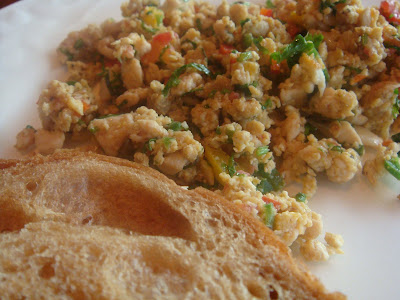 We then had a Philadelphia cream cheese and bagel which was recommended by our anonymous reader. This was very nice. The bagel was toasted just right and I have become a big fan of cream cheese off late. The accompanying fries gave a nice, salty, counter bite. 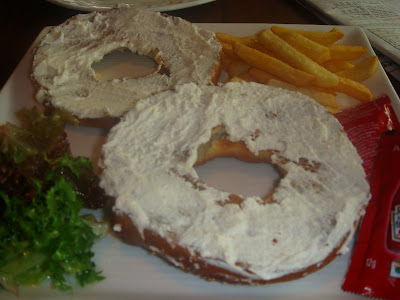 I then followed it with a Colombian coffee. This came in an interesting contraption which took me some time to unravel. The menu described it as having 'chocolate and vanilla overtones'. I am not much of a coffee connoisseur so did not get that. But I did like the bitter, slightly acrid taste. (As you can see from the picture I had woken up by then) 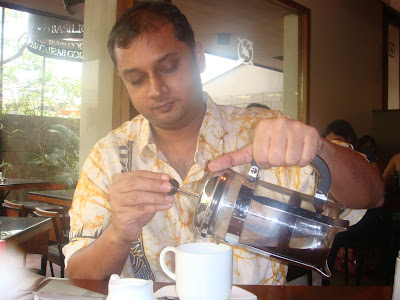 This is the part which I am most indebted to our anonymous writer. I ordered an 'apple pie' which was highly recommended by him/ her. I am quite fond of apple pies and this was BEST APPLE PIE I HAVE EVER HAD. It was warm, moist with just the right amount of sweetness. I savoured every bite. 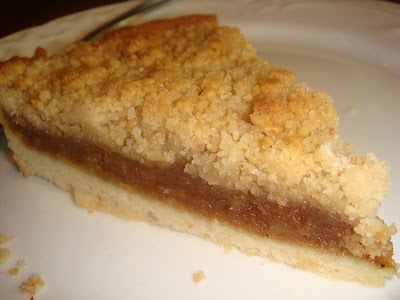 We sat in the inner air conditioned section. They have a nice al fresco section with plants and all. But then we can see straight into our house and it doesn't seem so special then. I took a picture of the birthday girl there. 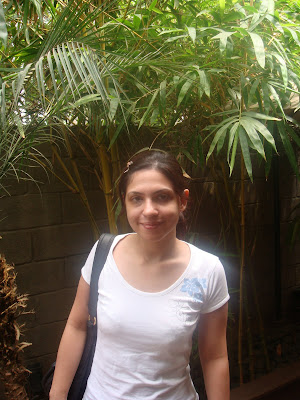 The service was prompt, pleasant and efficient but not very well informed. For example, I wanted to know what shakshuka was. The menu described it as a 'Mediterranean baked egg dish with capsicum'. Well one waiter said 'it is baked dish'. The other said 'it is an egg dish'. Not of much help.

The average price of the breakfast items were Rs 200 (USD 5) each.