on August 31, 2008
I thought I must write about this fish dish which I created today. Especially after the post I just wrote on my Bengali roots.

I call this post Salaam Bombay because it the it is on dish which is inspired by the cooking ethos of Bombay and the Western coasts.

Here's how I made this very simple curry.

I heated a teaspoon of vegetable oil in a pan.

I then made a spice base - tarka (Hindi) or phoron (as it is called in Bengali) - with curry leaves, dry red chillies, 3 split, green chillies, mustard seeds, methi seeds, a tea spoon of garlic paste and a bit of chopped onion. 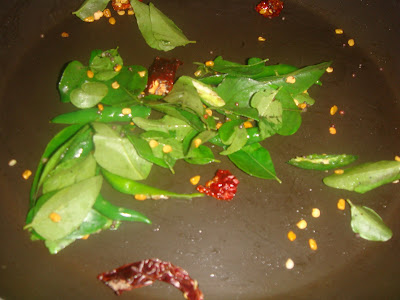 I then added 200 ml of coconut milk, half a tea spoon each of turmeric powder, red chilly powder, black pepper powder, garam masala powder, salt and sugar. I then added two table spoons of vinegar and a bit of water and got the sauce to boil.

I then plonked in two sliced pomfrets in the sauce. This is a deviation from Bengali cooking where the fish is fried and then put into the sauce. In Bombay you put in the raw fish into the gravy and cook it. 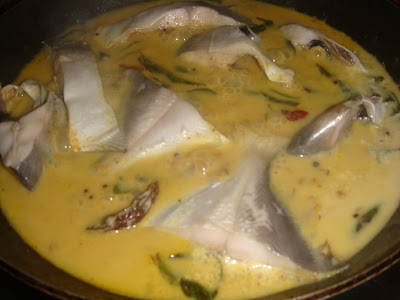 I let it simmer for about five minutes and turned the fish on both sides in this period.

The result was quite tasty and I have Kainaz to vouch for it. Quick to cook (15 minutes from start to finish). Had barely a teaspoon of oil.

AND was an original recipe. 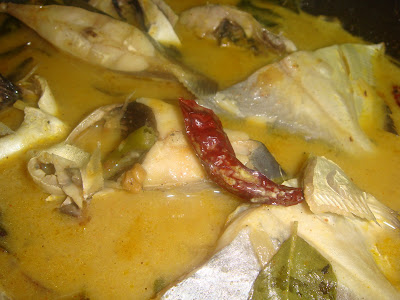 The interesting part was that I was cooking a traditional Bengali mustard fish curry at the same time on the other burner! Here I was making a Bengali mustard curry. The salient differences are as follows: 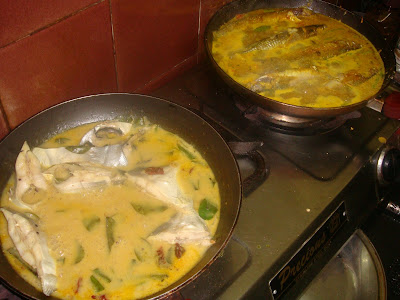 Jessica@Foodmayhem said…
Very interesting how the fish methods vary between Bengali and Bombay.
1 September 2008 at 08:41

Kalyan Karmakar said…
@Jesica: in a way this reflects the diverse food traditions of India. For example coconut milk is more preferred down south while the original residents of Bombay use dessicated coconut. You will find a higher use of vinegar at Goa. The North uses tandoori masalas and even makes kebabs out of fish. Bengal per se has quite a few ways of making fish. Try to get hold of Chitrita Banerjee's 'Eating India' or 'Goddesses of Bengal' which give a good perspective
1 September 2008 at 13:28

Kalyan Karmakar said…
Dr Food, let me know how it went. Coconut milk does magic to food. Hope you get the other ingredients easily
8 September 2008 at 14:23