Vada Pao: Bombay on the go 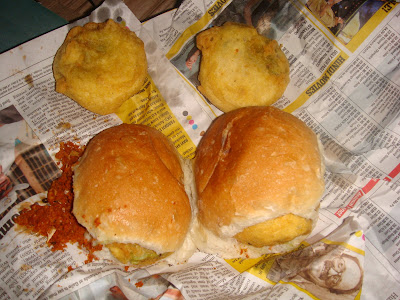 I realised that no food blog from Bombay can be complete without a note on the city's signature snack, Vada Pao.

This is a roadside snack which nourishes Bombay's teeming busybees. I used to have it at a stall outside LIC Building when I used to work at Nariman Point as I walked back to Churchgate Station. Those guys made some of the best vada paos. They would serve the vadas straight out of the frying pans..

'Vada' is the round yellow coloured thingie in the picture. It is a slightly mashed potato patty spiced with mustard seeds, red chilly powder and turmeric and deep fried in a gram flour batter. This is then put into the 'pao' which a slightly coarse local bun. This is seasoned with a bit chutney and chilly powder and is often served with fried green chillies and is served in an old newspaper.

Off late there have been a few who (e.g. Jumbo Vada Pao0 have tried to build a business model inspire by burger chains.

However, in its purest form vada paos have to be had from roadside sellers, when they are piping hot. One is enough to fuel one till one's destination.


So here's to the hot dogs of Mumbai.

Unknown said…
Aah... am gettin nostalgic.... Nothin can beat the road side vada pao for sure...These Jumbo King and all are actually ruining the taste and the flavor of a vada pao...
22 August 2008 at 15:34

Kalyan Karmakar said…
@kashi: I've tried Jumbo twice. Was unimpressed. In fact felt puky the second time. But have loved every roadside vada apo that I have had. The ones in the pictures are outside Kainaz's granny's house at Amboli. The one's outside the Castrol office at Technopolis tasted particularly good in the evening after a tiring meeting
22 August 2008 at 17:22

Unknown said…
....Infact next time you go to fountain area, there is a vada pao wala next to a sugar cane juice wala on the footpath opposite to Fountain sizzlers ..am assuming hez still there.... try the vada pao there and am sure u will love it
24 August 2008 at 18:43

Kalyan Karmakar said…
I will try it out especially since I now have a lot meetings in that area
28 August 2008 at 01:57