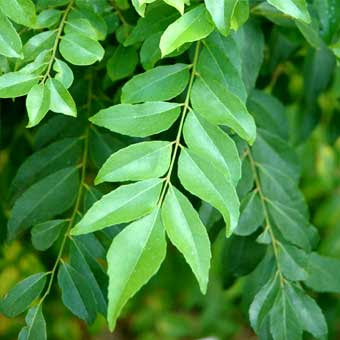 Curry leaves is an ingredient which is used quite often in the cuisines of South India and Western India. They are hardly used in Bengali or North Indian cuisine. The favoured herb for the latter two is coriander/ cilantro or 'dhaniya' as it is called here.
I made an interesting combination this morning while making an omelet for breakfast. I added some curry leaves which were in the fridge and sauteed it with onions, tomatoes and chopped green chillies before adding the egg white to it. It gave a nice, sharp flavour which was different from that of coriander leaves which are more commonly used in omelets.
Tip: How to separate the egg white. I crack an egg into a bowl. I then use a spoon and literally scoop out the egg yolk into another bowl. I guess this also works if you are following a recipe from Nigella Lawson and want only egg yolks!
I also add a bit of milk to omelets which gives it a nice fluffiness
Breakfasts Recipes

Manasi said…
hmm, milk does add fluffiness. when not adding milk, i do it alton's way, sorta scrambling it till its set.
on an aside, for trafiic, i think some deepika padukone photos might do the trick or jessica alba :)
24 September 2008 at 17:25

Kalyan Karmakar said…
@Manasi: Actually mine did turn out scrambled. Even with a non stick, my sticking to a tea spoon of olive oil led to an egg which looked like a Roman Ruin. The traffic tips would help. I need to put pictures of Nigella lawson & Tony Bourdain though given the people I want to get to my site. Think it will work?
24 September 2008 at 19:47

Unknown said…
The Irani joints in Mumbai (hardly any of them are still there today) were famous for their omlettes amongst other dishes and the main reason was the fluffiness which came because of adding milk to it.... Its a well known method I must say :-)
26 September 2008 at 02:43