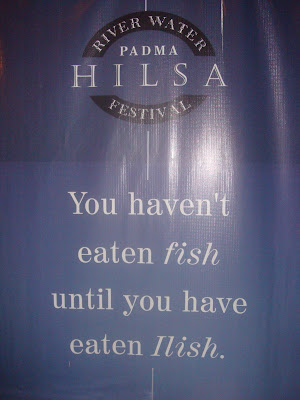 Hilsa or 'eelish' as it is known in Bengali is a prized fish amongst Bengalis. The most prized hilsa in Kolkata are the ones which come from the river Padma in Bangladesh. Eelish is to Bengalis what Norwegian Salmon is to the Western world.
One does get some eelish in Mumbai and we normally have it fried or steamed or curried in mustard at home. The only problem with eelish is that the back (gada) or tail pieces are quite bony and one has to be an adept eater to duck the bones
Oh Calcutta, the Bengali restaurant at Mumbai, recently hosted an Eelish festival.
Kainaz and I went there and I was quite keen to see what the merry men of Oh Calcutta had cooked up. As usual they didn't disappoint us. They had thought quite a few innovations with hilsa including some continental ones. We steered clear of the continental ones and went for the Indian dishes.
We tried the 'aamer achar diye eelish' (literally - Hilsa with mango pickle). I was quite intrigued to see whether the strong taste of mango pickle would over shadow the subtle taste of Hilsa. I needn't have worried. What we had was boneless (wow!) darnes of Hilsa steamed in a pumpkin leaves with the right balance of mustard and mango pickle paste. It tasted heavenly, sharp, yet well flavoured. the pumpkin leaf was an interesting variation and gave it a slightly bitter taste which was different from banana leaves which are usually used to steam eelish. A great start to the feast. 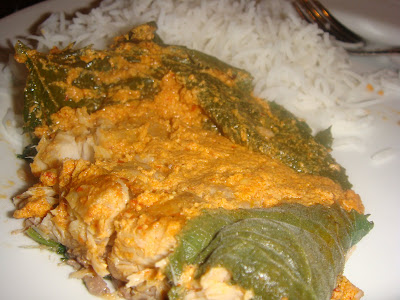 We followed this with shosha (cucumber) eelish. The menu card said this was a coconut milk based dish. I was a bit puzzled as I had never heard of coconut milk being used in Eelish. Eelish is the preferred fish of the people of East Bengal and they rarely use coconut milk in their food. This dish was another pleasant surprise. There was no dominant taste of coconut. Instead it gave a light cooling base to the mustard based spice. There were slices of cooked cucumber which added to the light and well flavoured taste of the sauce. Another great discovery. 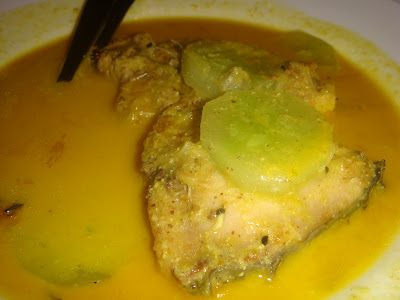 Both dishes were priced at around Rs 300 each (7 USD). The fish was very fresh and tender.
We started our dinner with some luchi and chholar daal. I was a bit disappointed to see that they didn't serve us half portions of luchi (2 pieces) or steamed rice. This was a bit of a problem as we had to order an excess. These little touches used to make Oh Calcutta special in the mercenary world of restaurants.
Still a great experience over all. We payed for the dinner with money my Mom had sent us from Calcutta as a treat after she got her first pension after our retirement. And both Kainaz and I really enjoyed the treat. 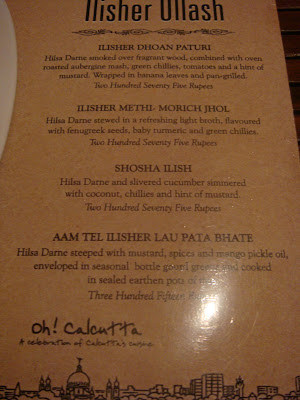 Anonymous said…
Hi Kalyan,
can u make a separate section for Food Festivals?...and if possible inform us abt upcoming good food festivals.
:)
10 October 2008 at 18:15