on October 03, 2008
I later realised I wrote too early yesterday when I spoke about blogging through the day.

Tech troubles such as low net speed, disconnects with blogger bugged through the day and I finally could not finish the post on Kolkata which I had been writing for a while on faraway diaries. I managed to publish it today finally.

Some Eid goodies did come our way. First from our neighbour who sent this lip smacking semolina kheer (semolina in milk dish).

Then Kainaz and I went to Kareem's for dinner. This is at the Carter Road food alley at Bandra. 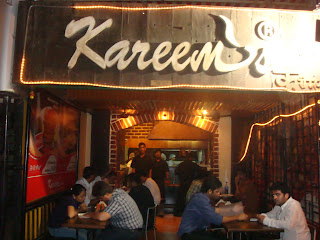 We started with shikhmapuri kebabs which were these very moist, tender, pate like mince kebabs which were fried on a thin egg base. It was so soft that one could just place it one's mouth and let it melt as one savoured the subtle flavours of this kebab.

We then had a portion of nalli nihari which is a curry made with the marrow pieces of lamb. The meat was on the bone and was unbelievable tender. It had a bit of fat which added to the fun. The curry was interesting. It was light brown in colour and had juliened ginger and green chilly which would give the odd sharp bite to shake one up. Heavenly! We had some whole wheat tandoori rotis which were straight off the tandoor and was so hot that it almost singed our tongues!

This al fresco place has about ten odd tables. The food is very very good and the prices are quite reasonable. A dinner for two can easily happen with 400 Rs or about ten USD.
Bandra Bites Indian food Mumbai highs

Jessica@Foodmayhem said…
MMM...minced kebabs, marrow, and roti! Sounds like a heavenly dinner to me.
3 October 2008 at 18:42