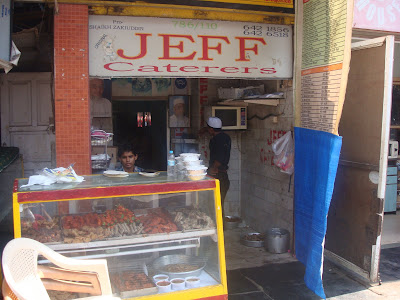 Jeff's at Bandra's Bazar Road is literally a hole in the wall take away joint. This shop in a tiny, dusty, congested lane has some of the tastiest Muslim food in Bombay. I went there recently to pick up lunch on Eid and was happy to see that their food was as good as ever.

They have these tiny mutton cocktail kebabs which are round, mince, kebabs which taste very good. The cost around Rs 100 or 2 USD for a kilo. You can even buy a 100 g and much on 7,8 kebabs for 50 cents or 10 Rs or so. They are good to take home if you are throwing a party. In fact the first time we had it was at Kainaz's friend, James' house at a party. He loves food and is from Calcutta... likely to make the right choice when it comes to food. 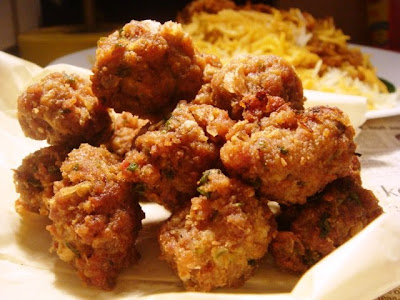 I am fond if their 'pepper chicken' which is a lightly marinated grilled chicken. You can chose a breast or a leg piece. I go for the leg. The trick is to chose a smaller one so that the meat is tender. The marinade is slightly salty and a bit creamy and grainy. I used to live on them at a time when I was on a 'no carbs at night' misguided frenzy years back. A leg (drumstick and thigh) costs Rs 40 or less than one USD.
Kainaz is more fond of the kebabs while I love the pepper chicken.
I have grown quite fond of their biryani too. The rice is nice, fragrant and firm. The meat, especially the mutton one, is very succulent. It has a masala unlike the Calcutta version but the masala is dry and adds to the taste. It has the odd potato too. I prefer it to the biriyani at Lucky. It costs just about Rs 50 or one dollar. 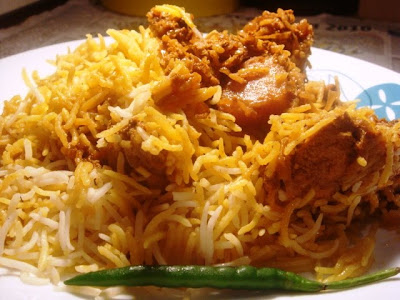 It is not like the biriyani at Calcutta though. To get that in Bombay you need to get yourself invited to the house of Kirti, chief foodie of www.feastguru.com who makes fantastic Calcutta-like biriyani and phirni amongst other things!
There is a shop called Lucky Star beside Jeffs. It serves the same stuff, is bigger, but isn't half as good.
Update: 25/8/2010 Chicken biriyani is Rs 75 (1.5 USD), Kebabs about Rs 240 (5 USD) a kilo. Taste: Vintage
Bandra Bites Indian food Mumbai highs

Anonymous said…
Thanks for the compliment. Now that you are writing about my Biryani, guess I will have to improve my standards :-).

Unknown said…
I guess this is this the same place from where you had picked up starters for the dinner we had at ur place when Narayanan was in Mumbai.... Used to see this place everyday when the rick used to pass through the bylanes while going to college, but never tried it ....Maybe next time :-)
14 October 2008 at 15:21

Scarlett said…
I don't like Calcutta biryani at all. Had heard about Shiraz' biryani so much...had it for lunch today. It was so bland & tasteless. I don't know what the fuss is about, really. Had Arsalan over the weekend. Though it wasn't as good as the Bombay biryani, it was better than Shiraz. As in..it was more oily but spicier & tastier. I miss Bombay biryani..the types you get at Noorani Persian Darbar. Yummm!!!
14 October 2008 at 19:17

Kalyan Karmakar said…
@Kirti....your biriyani is the best & doesn't need improvement. As were the spare ribs, and cheese rolled in ham and phirni BIG HINT.
The prices are ball parked but quality is excellent
@Kashi: Yes same place. You'll enjoy. Remember only takeaway
Scarlett: 'these Romans are crazy'! You have opened a can of biryani. Noorani? The soggy rice place? Great caramel custard though. Persian Darbar? Never went there. Take care :)
14 October 2008 at 21:55

Anonymous said…
Much like you, but on a different dish, I used to live on their biryani when I first started working in Bandra. But its been long, and your review makes me feel like ordering some biryani from there right now!
You know what? I think I might just do that!
1 February 2009 at 14:04

Unknown said…
Really like what you have to say. Obviously a big foodie. Seeing your knowledge of Bandra, would you mind if I connected with you offline/via email? I am based in New York but thinking of relocating to India-Mumbai-Bandra.
19 August 2009 at 21:44

Kalyan Karmakar said…
hey Indranil sure. My email id is kkarma74@gmail.com and I am on facebook too. Fire away. i have lived at Bandra for ten years now so have a hang on most things except children's schools and a sureshot way to get a good driver
20 August 2009 at 11:39

SwB said…
Erm, why are we talking USD? I'm sure our NRI friends are well adept at doing the conversion! :)