An apple a day...of apple teas and the world's best apple pie 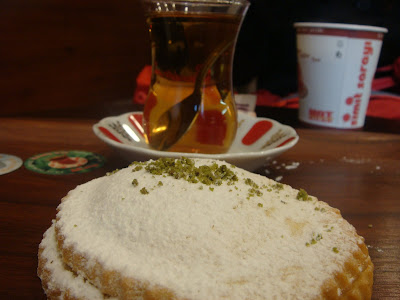 Simit Sarai is a confectionery at the beginning of Istiklal Cadesi (Taksim) at Istanbul. I don’t know if it’s a chain as I saw other shops with the same logo. A bit like the Udipi joints in Bombay called ‘Shiv Sagar’. Simit is also the name of the Sesame flecked, horse shoe shaped Turkish bread.

We went to Simit Sarai on our first evening at Istanbul as we sought refuge from the icy wind.

I had an apple tea. Both Kainaz (who had a sip) and I fell in love with it. Apple tea is the equivalent of the Indian masala chai. It was the favoured brew of the locals and they would often have it in shops, at cafes, in the streets. It is a sweetish, tangy, apple flavoured drink which really perks one up. Even Kainaz, who is not a hot tea drinker took to it like a fish. The road side version is made with a apple tea concentrate. But you can also buy apple tea in the markets which has whole tea leaves and apple bits and needs to brewed. 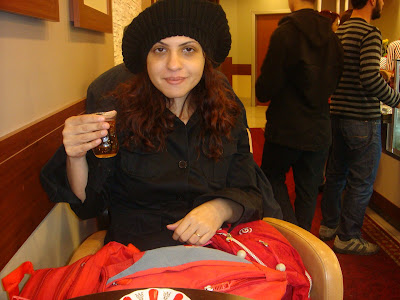 Simit Sarai had a range of savouries such as sandwiches, tiny round cakes (not the normal pastry slices) and Turkish Delights (local sweets).

What won my heart was the elmali (elma means apple). This was the cute, cherubic apple pie which had a very thin crust covered with sugar dusts. It was stuffed with thin, tangy, cool slices of apple. Each bite was a delight. The memory of which kept drawing me back to Simit Sarai. It is the best apple pie that I have ever had. Simple, uncomplicated and comforting.
Back in Mumbai, I miss my Simit Sarai every single evening! 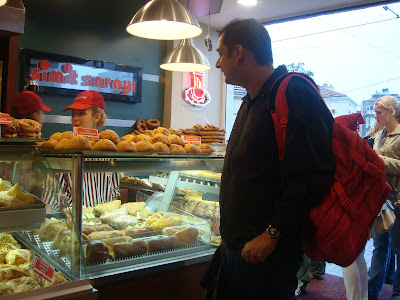 Manasi said…
Whenever I find something good while on vacation, I always wonder whether enough begging will yeild me a recipe :)
And the memories of something like that apple treat only get stronger with time, esp when you know you aren't going to get it soon.
13 November 2008 at 22:49

Kalyan Karmakar said…
@Manasi: beautifully put. The recipe wouldn't help much as I can't bake. But I have made my favourite Goan chilly fries and baffats in memory of our holidays there
@Scarlett: sounds yum. Basilico has a good apple pie
@K: let's open the pack
14 November 2008 at 20:09