on November 14, 2008
We were at Andheri (E) for a presentation today and wanted to go for lunch after that. My team members, like me, did not feel like a quick sandwich, so we decided to go to Mainland China
We were quite looking forward to the lunch as the three of us like Chinese food and Mainland China has a good reputation and we had good experiences earlier.

Today was quite patchy though. We started with dim sums, chicken sui mui, which I must confessed we all liked. 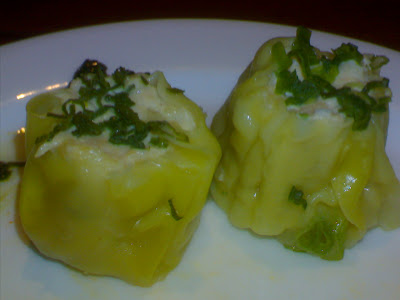 Our main course though was a bit gruesome as it seems in the unappetising photo from my cell phone. 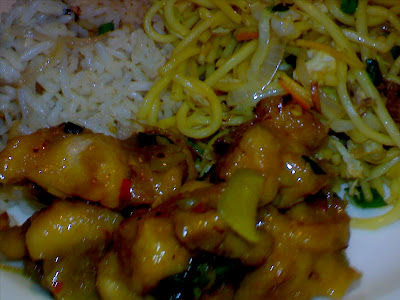 The shitake mushroom and fried onion rice was good as I remembered from my last visit.

The kinji (?) chicken with green chillies and spring onion was under cooked. The meat was soft and didn't have a good bite or mout feel. It was a bit squishy. We were disappointed.

The chicken hakka noodles was horrid! My friends said that the chicken bits were smelly. I tried it out myself and saw that they were right. It made the dish taste fetid and rotten. I had two bites and left it. So did the others. In fact I refused to pay for that. You don't expect this in an upscale restaurant. It really left a bad taste in the mouth.

What was ironic was that we had gone to China Gate last night after watching Quantum Of Solace (great film but where was Bond?) and had the most awesome Hakka Noodles, sliced roast pork and batter fried prawns. What a fall in just 12 hrs. (don't get Kainaz started on my love for Chinese food).

You earlier saw how my team mates loved their food as much as I did. Well that holds true for most of us in the team. Two more team mates, who were at another meeting close by, joined us at the CCD at Saki Naka and we then had a 'meeting' over some lovely frappes...and then my weekend began!
Mumbai lows Oriental Woes

k said…
I would be more accepting of your obsession with chinese food if it met the standards of last night:)
17 November 2008 at 14:13

Purvi said…
Came across two of your posts on MLC simultaneously - You probably ended up loving the same dish given 1.5 yrs and an upset tummy?
Or did they get o'some in that time?
28 January 2011 at 13:25