Roll over: Calcutta rolls at Bandra 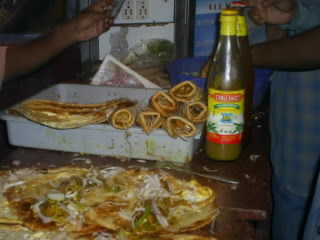 I discovered a new roll shop at Bandra this evening. This is called 'Dee Rolls' and is beside A1 Bakery at Hill Road. There was no visible sign of it being a Bengali roll shop. However, I checked it out since it was new and then saw them making Calcutta style rolls. We had egg chicken rolls. The roll was quite tasty and filling. The chicken kebabs were succulent though they tasted more like tandoori tikkas than the chicken kaati kebabs of Calcutta rolls. Prices range from Rs 30 - 40 (close to one USD).
I feel that the fare at 'Calcutta Roll Centre', especially the chicken rolls, is better and more like the rolls at Calcutta. They are more into fanfare with the cooks wearing uniforms and dressed in chef hats. The prices are similar to Dee rolls despite its external trappings. This stall is on Linking Road opposite Amarsans, close to Shopper's Stop.
So now there are two decent roll shops in Bandra and one Sweet Bengal. Now we need one good Bengali restaurant here.
While on roll shops at Bandra one must spare a thought for the couple who had started a roll shop at Pali Naka called Chowringhee Square in the early 2000s. Pity it didn't last long. Still one must admire their spirit.
Bandra Bites Mumbai highs

Kalyan Karmakar said…
@Mansi: they are made with maida parathas (not roomali roti) and an egg is plonked on one side....or has a dry chicken/ mutton kebabs and onions and chopped chillies (unlike the gravy in frankies at Bombay). Read more on this here http://finelychopped-k.blogspot.com/2007/10/dozen-phuchkas-followed-by-mutton-roll.html
@Kainaz: doesn't beat the ones at E3 Palmlands
27 November 2008 at 12:55

Kalyan Karmakar said…
@Mansi: they are made with maida parathas (not roomali roti) and an egg is plonked on one side....or has a dry chicken/ mutton kebabs and onions and chopped chillies (unlike the gravy in frankies at Bombay). Read more on this here http://finelychopped-k.blogspot.com/2007/10/dozen-phuchkas-followed-by-mutton-roll.html
@Kainaz: doesn't beat the ones at E3 Palmlands
27 November 2008 at 12:55

Jessica@Foodmayhem said…
Hey Knife, I just wanted to check in and see if you and your loved ones are OK. Mumbai has been on the news and we've been quite concerned.

Kalyan Karmakar said…
Hey Jessica and Lon, Thanks for asking. We are fine and noone we know were directly affected. Though we knew some people who were stuck or had relatives stuck but got out eventually. But we were completely dazed and glued to the city. This is a city very dear to us
29 November 2008 at 13:40

Anonymous said…
Still think the rolls at Lokhandwala - Bhima, samosa & more, Hanglas...Try them out...Bhima wld also give you a the mustard tinge to tingle your tongue. Khoob Bhalo
10 March 2009 at 13:19

Kalyan Karmakar said…
@Anaggh...I guess the Lokhandwala ones would be betterbecause the standards at bandra have dipped. I have heard a lot about Hangla rolls. Just feel too lazy to go to Lokhandwala ;)