There were two places which were favoured for continental fare amongst us when I shifted into Mumbai ten years back. One was Churchill at Colaba. The other was Pot Pourri (the 't' is silent)at Turner Road.

Both have stood the test of time and have remained popular over the years. I must confess that I am more of a Churchill fan. I like the fare at Pot Pourri but it has not been a hot favourite. I have enjoyed the odd grilled chicken frank with cheese or shrimp in white sauce but I don't have any big favourites here or dishes there which come to mind immediately.

Don't get me wrong. The food is good. Reasonably priced. But I would any day head to Out of the Blue (love the ambiance and the food - 4 cheese pasta, one of the best pesto pastas, red ginger pork sizzler, lovely fondues), Basilico (great pastas, beef roulede, Morrocon stew, apple pie, gooey chcocolate cake) or Red Box (cheerful decor - garlic chicken, chicken paella, that lovely cheesy lobster dish) if I wanted continental fare at Bandra.

Pot Pourri started a special Christmas menu a few years back. Kainaz and I have been to it thrice so far. We went there this year too. The first year was a bit of a disaster with the hour long wait at the table and the very salty roast ham. But things have improved since then.

We had a roast turkey this time which was nice. It did not luck like the brown turkey Monica makes in the Thanksgiving episodes of F.R.I.E.N.D.S The sauce was slightly light coloured, sweet and creamy. But the meat of the turkey I had a few days back at TGIF, Gurgaon, was much better. It was more succulent. The roast turkey at Pot Pourri was served lukewarm. Why? Don't they have a micro? 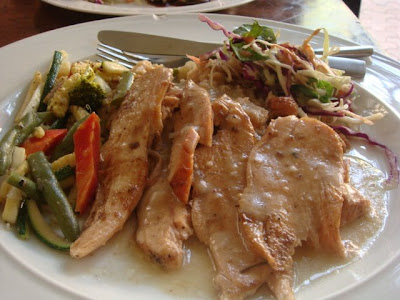 We also had a portion of braised pork sausages in caramelised onions. This dish was quite tasty. The only problem was that it was a bit difficult to find the sausages amongst the onions. But that could also be because we spite it between the two of us. Still the dish was hot even though we had it after we finished the cold turkey (pun intended). 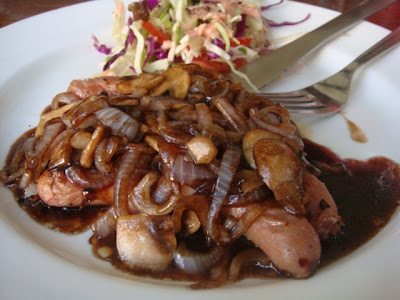 One more thing that I don't like about Pot Pourri is its location. It is bang on the Turner Road junction. The sound and sight of autos and the swirling dust and smog don't make for a pretty sight, even if your date is very pretty! 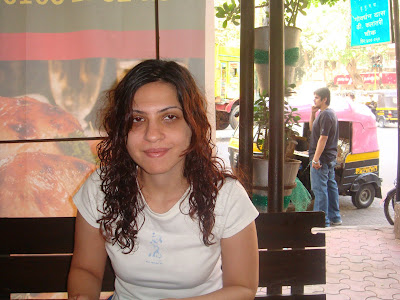 While the food at Pot Pourri is adequate, their desserts are right up there amongst my favourite. They earlier used to serve desserts in a fridge counters in a corner of the restaurant. They have now created a dessert shop after they expanded. I think it is called Melting Moments.I love their chocolate truffle and occasionally pick it up on Sunday nights.

I had their Christmas Pudding on Christmas which was much nicer than the American Express one. It had just the right balance of sweetness and a tantalising taste of rum. The dry fruits had a nice bite to them without being too heavy or cloyee unlike the Amex one. 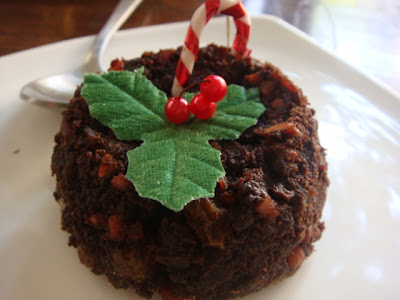 Kainaz had a chcocolate log which is similar to the truffle and is quite nice. 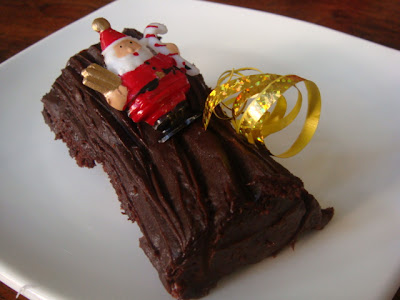 At night I got home a chocolate truffle with a marzipan centre. Heavenly! 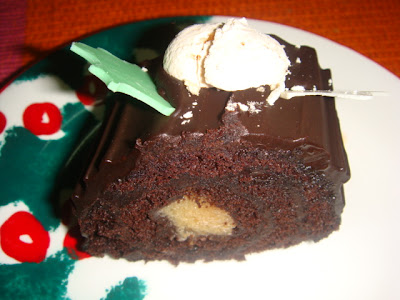