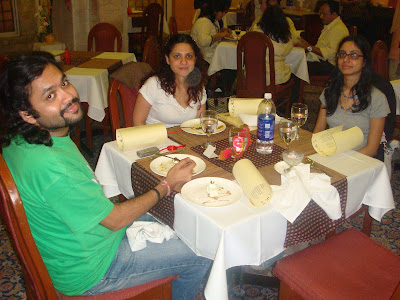 Kainaz did not drink tea or coffee when I first met her. Then she discovered cappuccino a few year's back. There's been no stopping her since then. You will now often find her at a coffee shop with her order of a cappuccino which is hot (yes you have to ask for that in most places), with froth (very important to Kainaz), in a takeaway cup with a lid and a straw. For some reason she can't have it from a mug or cup without the froth. These bawis are mad!
So coffee at home doesn't work for her - where's the froth?
Cut to a couple of days back when our friends Tanuja and Nishant dropped in with a surprise birthday gift for Kainaz.

In their words 'a rather late birthday gift for a taste you discovered rather late'. Kainaz's birthday was on 22nd August. Unlike me, the three of them write for a living as you can make out from the inscription.

Well the gift was this fantastic coffee machine. To be more specific a 'Morphy Richards Espresso Coffee Maker With Frother'.

Boy, how thoughtful can you get? A fairly expensive (I am sure) solution to the only craving their friend couldn't satisfy at home. Hat's off to them I must say even if this post makes them blush.

I must also go on record saying that these are my observations and do not reflect Kainaz's attachments to her other friends or the gifts they give her.

At times I am often stuck on what to give someone. And I can rarely claim to have been so bang on. Well my cousin used to like the Spiderman action heroes I used to give him. Come on, whom am I kidding. This is a topper.

Well the machine is very simple to use. The coffee is authentic as it gets. It's hot. It froths. Its too cool. 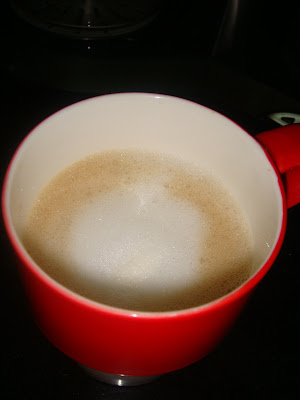 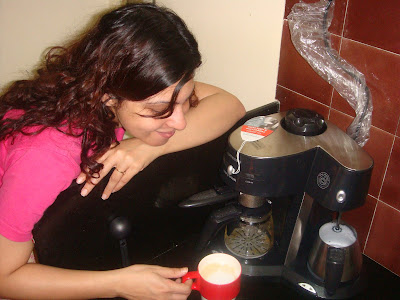 PS: Kainaz drinks tea after she discovered green tea in the tea centre. Tea bags will do.
Food musings From the hip

Moonshine said…
I am a total tea dinker.. and cant imagine life without tea.. morning tea an absolute must.. and it has to be made by.. me! I cant have tea made by others (usually).. its too milky.. too weak etc etc.. so whenver i go out, i tend to have coffee.. filter coffee preferably.. i love the fragrance which fills the house when filter coffee is being made..

Another interesting coffee i had is black coffee with ginger, pepper, basil leaves etc.. during extremly cold winters in delhi.. it was amazing!!!
15 December 2008 at 00:10

Kalyan Karmakar said…
@Jessica and K: and I actually impatiently do away with froth so that I can hit the coffee. Takes all sorts :)
@Moonshine: I am the same about my coffee. I always make it myself at home. Have been doing so since school and haven't let my Mom, PG landlady and now Kainaz, do it. I like it with a dash of milk and very little sugar. I avoid coffee in most offices because they never get it right
15 December 2008 at 20:46

A slight, very slight, exception would be the Hazelnut flavour at Glorias.

I have tried Irish coffee a few times, especially, at Infanteria. Never figured out how to drink it. Do you mix it?

The first time I heard about Irish Coffee was when I saw a movie called 'The Love Bug' with me dad. The bad guys filled Herbie, the car, with Irish coffee and got it drunk before a race
16 December 2008 at 16:48

Gaurav said…
i cant tell you how long i have been looking for a capuccino machine. I have seen this Morphy Richards machine around but had no clue if its worth getting or not.

I was in Athens and i walked into a shop that sold only coffee machines but nothing i could carry as cabin baggage.

I wouldnt mind one of those Nespresso machines either but no one seems to sell anything in India without charging you 300% times Western prices !

Kalyan Karmakar said…
@Gaurav: I don't know the price as it is a gift.

But it's completely worth it on account of:
1. ease of use - a breeze
2. authenticity of final product

vandana rajesh said…
Here after long. I too used tonot drink tea or coffee, now of course I don't mind a cup of coffee once a while(yes the froth is very important)...but coffee is not coffee without the froth. I like the frappe at Cafe Coffee day, the coffee all cold and yes some chocolate sauce and the scoop of ice cream added in makes it a real treat.
19 December 2008 at 20:38

Kalyan Karmakar said…
hey vandana, its been ages. great to hear from you. I love the cold coffee at a place called Candies close to where I live. had some great chocolate shake at a Starbucks at Istanbul.