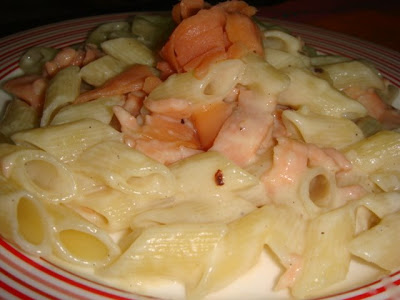 This has been a quiet Christmas. Christmas night’s never been more silent. Especially after 26/11.

Well I could keep giving excuses but I realized mid way into the 24th that I had not picked a gift for Kainaz! And I was supposed to pick her on the way back from work so there was no opportunity to buy a last minute surprise gift.

So I did what I know best. I cooked! I went to Jude’s cold storage at Pali Naka and picked up a 200 g pack of Norwegian smoked salmon. Kainaz’s favourite. I don’t know if you got the symbolism but Norwegian salmon is pink which is somewhat similar to Santa’s and mistletoe reds which have become synonymous with Christmas.

The advantage of buying the salmon is that you would never get these sorts of quantities in a restaurant serving. And boy, there is never enough of pink salmon for Kainaz.

I wanted to keep the salmon flavour dominant so I made it in a very mild cheese sauce. I remember that I had done it in a pesto sauce last time but this time I wanted to go ahead with a pink and cream look.

So here’s a lowdown into the making of Santa's Norwegian smoked salmon pasta:

- Melt the butter
- Add the milk and corn flour mixture
- Add a strip or two of salmon (2 table spoons) for the flavour
- Add the cheese cubes and mash it with a ladle
- Bring the mixture to boil and then make the flame low as the sauce begins to stiffen
- Add the pasta, spices and salt (1 tea spoon) to the sauce, stir
- Add the smoked salmon and switch off the flame in not more than ten seconds. This is very important as you don’t want the salmon to cook
- garnish with some fresh strips of smoked salmon on top
- You are ready
This Christmas story had a happy ending. Kainaz loved the pasta. She had managed her schedule better and picked a lovely red Fabindia shirt for me. And I did not end up felling guilty about not having a gift to give her.
Note:
Conti Food musings Recipes