on December 29, 2008
I live at Bandra at Mumbai. Bandra has been my home for close to ten years now. The place is bloody addictive and I can’t imagine living at any other place at Mumbai. Even, if this means paying fairly ridiculous rents.

I can’t think of any other place in Mumbai which represents its cosmopolitan spirits as well as Bandra does. It has a heady mix of Christians, Muslims, Sindhis, out of town PGites (which I once was) and now, expats.

Bandra has a Catholic Christian base with a number of the original residents being Goan and East Indians. So you would have a big following for Portugal (who used to rule Goa) during the soccer world cup here. And of course ornate Churches, meat shops, lovely bakeries and quaint cottages.

Its possibly a happy coincidence but we are soon going to shift into a lovely apartment which we have rented from a local Goan.

I decided to have a Christmas dinner which was a tribute to our Catholic hosts of Bandra. In other words the Goan delights of sorpatel and vindaloo.

So Kainaz and I headed to Simply Goa, the newly opened Goan restaurant, near Khar Station. This was our second trip there in a month or so. In my mom in law’s lexicon this place would qualify as ‘worth repeating’.

We started our meal with a prawn chilly fry. As I have written earlier, Goan chilly fries take various shapes. The ones at Brittos and Infanteria at Goa are more tomato based, have a brownish tinge and tend to be a bit sour. The chilly fry at Simply Goa has the natural colour of prawns, is less sour and is interestingly spiced with coarse pepper and fiery green chillies. The prawns were very fresh and we quite loved it. We mopped this off with 'pao', coarse Goan bread. Though to be honest, I preferred the Goan sausage chilly fry which we had the last time. 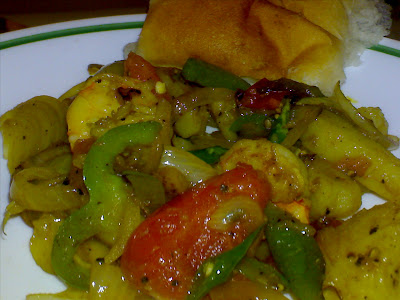 We ordered a pork vindaloo for our main course. This was heavenly too. The gravy was thick and very spicy. The way I like it. Some vindaloos tend to be more sour. The one at Martins at Colaba for example. I am not too fond of that. The one at Simply Goa was just up my street.

I ordered a peas pulao to go with the vindaloo. This was mind blowing. It was definitely the best I have ever had. And I must say I did not expect much in a Goan restaurant as this is not a Goan dish. I have always imagined peas pulao to be a dish with crisp rice, flavoured in its own freshness, firm peas and a thin, crisp onion. I had this more than a decade back at Kwality, Calcutta and then at Simply Goa. I loved it so much that I polished off the fairly substantial portion by myself. It was a dream come true. 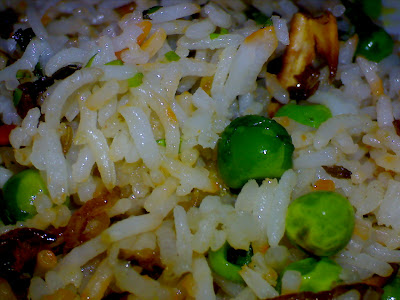 I couldn’t have asked for a better Christmas dinner even if Santa was Goan.

Unknown said…
On my next trip back home, I guess we'll go to this place, wat say??...Unless u discover something new and you feel is worth going to....Try the prawn balchao, chicken xacuti out there and let me know how it was
6 January 2009 at 23:36

Kalyan Karmakar said…
I tried the balchao http://finelychopped-k.blogspot.com/2008/12/simply-goa-goa-gets-closer.html I think it was the pickled version. Slightly sweeter than the curried version of Goa but nice. I don't xacuti as such. Booze is very cheap
7 January 2009 at 19:43

Anonymous said…
If you want to know more about the Diamond city and textile city of India, Surat. Shopping surat is the best website and largest informational website which can provide you not only

business information but also it gives details information about the city. You can get here Surat history, economy and all that you need. We have arranges whole website in categories so that it’s easier for you to get information.
14 October 2009 at 15:29