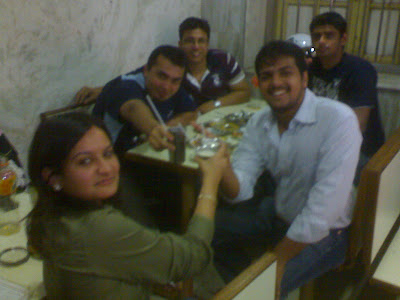 Yesterday some folks from office and I went out to the sort of place where you would rarely see me in. This was a restaurant called 'Madras Cafe', established 1940, at King's circle in Central Mumbai.
I have had me share of dosas while growing up but I have always looked at them something to have in between meals rather than as a meal. But someone came up with the idea of going there as most folks apparently wanted a vegetarian meal. So Madras Cafe it was. I found it a bit strange as we were going there for a farewell of a Goan colleague. Goans are staunch meat eaters. But apparently the charm of Madras cafe attracted him too.
Madras Cafe is more of an a la carte place unlike the other famous South Indian joint, Rama Naik, at Matunga. Rama Naik serves set meals or thali as they are called. It is a fairly bare bones, no non nonsense, non air conditioned, clean, eat and go place.
My team at work consists of a group of fairly wild and big eaters. We kept calling for a variety of South Indian dishes - a range of dosas, utthapas, idlis, vadas, curd rice and bisi bela bhaat.
I hadn't had bisi bele bhaat before and I am unlikely to order it in the future. It is a sort of a liquidy khichdi which photographed as badly as it tasted.
The uthapa was really really good. I loved the semi fried onions and chillies in it. Reminded me of my friend Gopa in high school who used to get uthapas for lunch. His mom used to make lovely ones and I would pounce on his lunch box the moment he opened it. I was 16 years old then! I used to call them South Indian pizzas. 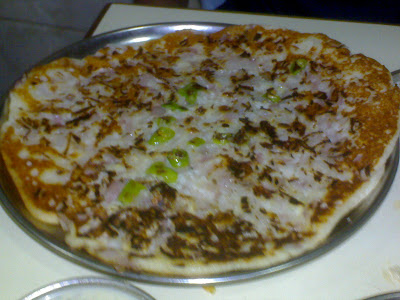 The rawa (semolina) dosa was pretty good. It was light and crispy. The first time I had rawa dosas was at Bombay when my summer MBA project guide, Sanjiv, ordered it during my first visit to Bombay to present my paper. The sambhar at Madras Cafe was less sweet than what you get at Shiv Sagar, Bandra. The folks at Madras Cafe had obviously stayed true to their South Indian roots unlike the Shiv Sagars of the world who cater to the Gujaratis of Mumbai who are vegetarian, moneyed and prefer food which is on the sweeter side. 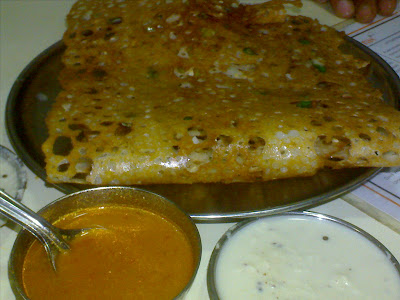 There was a Jain in the group who couldn't have onions or any root vegetables due to religious restrictions. So our waiter got him a Mysore cheese dosa. It was really tasty and had a nice grainy touch to it. I kept eating from our Jain friend's plate (a hearty eater who normally goes berserk about cheese garlic toast) though he couldn't eat our stuff. His face fell with every bite I took. I guess I am still a bit of a food bully, 18 years after I used to leave young Gopa hungry. 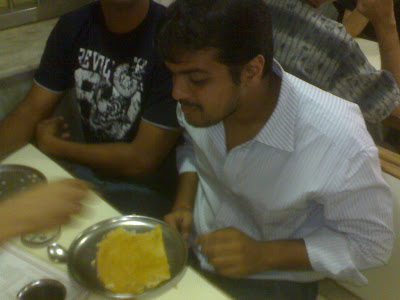 There was a gender war going on during lunch as we guys would keep calling the food over to our table. The girls were sitting in a table beside us but they hardly got anything. 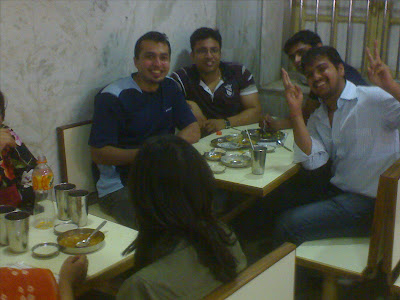 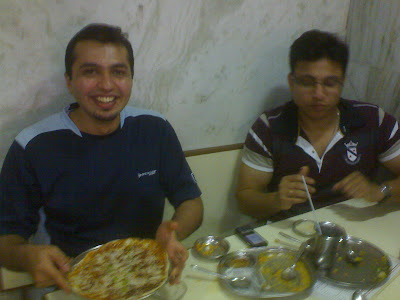 The gilrs ended up having largely idlis which, well, are boring. Plus the Madras Cafe folk dunk the idli in the sambar and get it while I like to have mine separate. 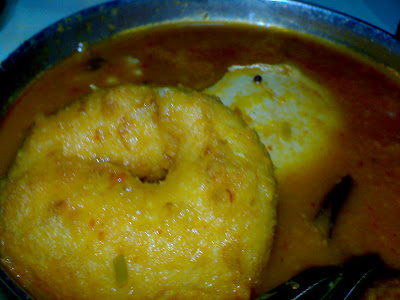 We ordered some 'frozen payasam' (kheer, rice pudding) for dessert. It was neither good nor bad. I like my kheers to have resins/ kishmish. The others went for ice cream after that. I headed back to work as I had a telecall to attend. But I did enjoy our afternoon boisterous break. Helped one destress from work. I needed that.

And the perfect way to end it was with the 'filter kaapi'. A friend on Facebook keeps insisting that I don't call it just 'coffee'. This south Indian coffee was pretty nice and strong. You need to shunt it from the cup to the tumbler the cup is placed in till it cools down. Most of us tried doing so thanks to our dosa highs. 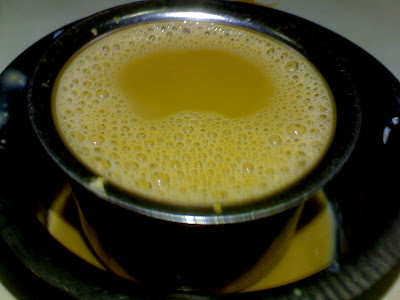 arvind said…
please do try the bisibele bhaat if you ever come down south. Especially B'lore or Chennai. Do give it another chance. :P One of my favourites in the south Indian dishes. Love your blog. :)
16 October 2011 at 17:20