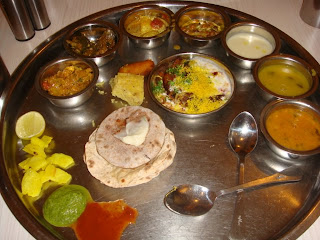 Gujaratis are one of the largest communities of Mumbai. After the Maharashtrians of course. They form the base of the trading community here and a number of them own shops, are in the diamond business and so. Just as one calls Bengalis, Bongs, Gujaratis are called "Gujjus".
The key food association with Gujaratis are that they are vegetarians and that their dishes are very sweet. I know this is as sweeping a generalisation as 'all Bengalis love fish', (I don't) but I guess it holds true for most.
There are a number of Gujurati thali joints such as Samrat, Golden Star Thali (our favourite) and Rajdhani (which has opened quite a few modern looking branches recently).
I went there (Rajdhani, Charni Rd) with some office folks recently.
The basic plot is similar to most Gujarati thalis.
They start of with a few snack items called 'farsan' - samosa, dhokla, tikki.
They then fill the tiny bowls with a variety of vegetarian subzis and dals (including a very sweet one) and kadi (this is a sweet dahi/ curd based dish as against the Sindhi, besan based, kadi). You also get a a choice of hot rotis topped with ghee. This is the best part of the meal. 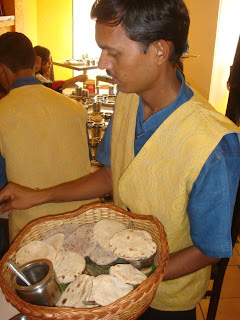 This is followed by steamed rice annd khichdi (daal and rice porridge).
A mix of Indian sweets end the meal.
I know this post sounds a bit cold, bland and not very exciting. But I can't pretend to be otherwise. I follow the great Anthony Bourdain's lust for flesh. A Gujju thali is not our scene. It's more an Olympic event for people like Kainaz and me. Something to be had once in four years.
Though honestly, the food is not bad. Also it is worth trying out for the experience. It is quite a busy affair with waiters coming one after the other to refill your plate. In fact I found it quite difficult to take a photo of the group with the constant stream of waiters. And at Rajdhani they come and wash your hands at the end! 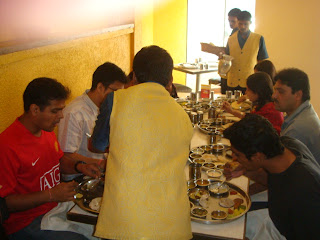 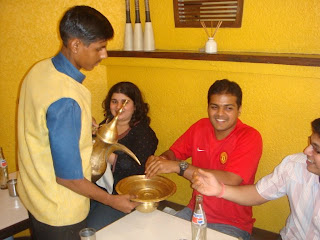 It is also the sort of place where you can take an out of towner to give a flavour of ethnic Mumbai. As long as the out of towner isn't Anthony Bourdain!
The average cost at such restaurants is about Rs 250 (5 USD) per head. 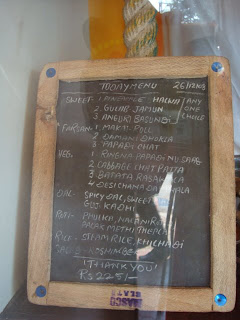 Moonshine said…
Have you been to Chetnas? Its at fort.. serves both Gujju and Rajasthani thalis.... I usually end up having Rajasthani thali.. its quite nice.. I find the Gujju thali too sweet!!!
31 December 2008 at 20:19

Anonymous said…
Ah yes, vegetarian food is an acquired taste for those who are habitual meat-eaters. As someone who grew up eating vegetarian food, I must tell you that the best thing about Gujarati thali is the mind-boggling variety of flavours, tastes and textures it includes. Of course, the unlimited refills combined with the serving staff's attitude of 'It gives us pleasure to serve you' (which I've seen at EVERY single Gujarati thali restaurant I've been to), really adds to the charm.

Samrat is a tad richer on account of the liberal ghee/oil used but I may be biased. What do you think?

Also it would be interesting to know if Rajdhani manages to maintain consistency of taste quality and service across all their restaurants. Have you been to any of the others?
2 January 2009 at 11:39

Kalyan Karmakar said…
@Moonshine: I had been to Chetana years back. The friend I was with was very keen on having 'daal bati churma' which I understand is Rajasthani. Frankly the Rajdhani food was not too sweet. There were specific items like a daal and the kadi which were sweet

@Ideasmithy: The other day I was echanging posts with a local food blogger who happens to be a vegetarian. I was making a point similar to you where I was saying non veg is an acquired taste and there is a lot you can do with it. I guess the lesson is that humans are inventive enough to do wonderful things with food within their boundaries. Of course, what's sauce for the goose, might not be so for the gander.
Actually Kainaz and I are Golden Star Thali regulars. It was sort of convenient (Rajdhani at Charni rd is new) and plus would combine it with a Central Plaza flick.
I'd been to the original RD at Kalbhadevi after reading a Times article sometime back but don't remember much about the food to comment on the consistency.
I've been to Samrat close to 7,8 years back. Again, didn't leave an impression.
I agree that one big part of a Gujarati thali is the ethnic fanfare around it
2 January 2009 at 11:56

hi, well i do a thali once every two months. just did one recently and was not impressed.

its all about the combined impact, if you get lucky sometimes things string together and its a fabulous.

It appears you are a huge fan of Tony B. I ate at Les Halles once but i didnt know about him then. Not sure if he was even cooking there then. They serve plenty of veggie stuff :)

Gaurav said…
Additinally Chetna is probably one of the worst thali purveyors.

Rajdhani i fear have also lost their grip with rapid expansion. Golden Star i never liked, all hype.

I find smaller, lower budget places spend more time on the food and do a much better job in less 'sexy' ambiance. Places like Joshi Club, Thakar club.

Samrat & Status is usually not too bad a bit hit and miss sometimes but good service. better than Rajdhani for sure.
17 January 2009 at 14:34

Kalyan Karmakar said…
@Gaurav: thanks so much for your round up on the Thali Joints. i was not the best person for it. Your comments would be far more useful to someone interested in Thalis.

Veg at Le Halles. The master has sold out to commerce!? Must have been after he quit. I like A B because the passion he gets, his wry sense of humour (not just the jibes at vegetarians) and that he is not la di da unlike the Vir Sanghvis of the world. His bottom of the heart approval of the vada pao is an example of that he really speaks from the heart. I must admit that i am very heavily influenced by him in my writing style

But best thing he had in Mumbai. You skipped his enthused description of the bheja and kaleja at Md Ali Rd before the ad break and VP. He said that we made organs in a much tastier way than they do in France. In fact he said this was one of the best renderings of organs and entrails
20 January 2009 at 13:55

Pallavi said…
Hi Kalyan- I had read this particular review a couple of days back and made a mental note to visit Goldenstar Thali; which I finally did last weekend.

Wanted to share my feedback about this place. Firstly the good part- the service was absolutely fantastic, the waiters were super quick and were almost singing while serving ( I was very impressed)
Now the not so good part- The food though tasty was served with such super speed that we hardly got a chance to taste anything that we were eating.. ( it was like someone played fast forward button.

I love good food but super large quantity and too many number of dishes, is not something everyone enjoys. ( For eg: a lot of people can not enjoy the dinner at weddings) so even though I think the food was well made and tasty; there was just too much on the plate to enjoy every dish..

Over all- great food but too much of it killed the taste but I guess everyone should try this place once- so thanks for your post on Golden Star Thali.
20 November 2009 at 19:57

Kalyan Karmakar said…
Pallavi, thanks for the update. gosh this review is from so far back. For some reason Golden Star has been my most favoured (one in a yr and a hlf) thali joint. Possibly because there was nothing else in those parts earlier.

Uou have summed it up well. Its quite a circus. Some parts are nice. But they largel go past you in a whirl