Ruby Tuesday: before the the great Gurgaon escape 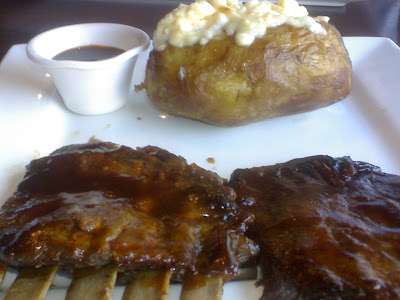 Note: another ffaraway diaries entry which should have actually been on finely chopped.

I was quite happy to leave the Smart Villa, the heartbreak motel, of Gurgaon.

The client presentations went off like a dream. In fact the board applauded after I finished. I could barely hear it though as I was deaf from the air cabin pressure drops. Still it was a relief as I had flown in with a bad throat and blocked nose and was keeping my fingers about lasting the presentation. And then I had to spend the night at the sleazy dump where I was kept. Few things at work give me a bigger high than a good presentation. Horrible acco while travelling on work is at the other end of the scale. As a friend of our's said in a different context to his client, "what did I do to deserve this?"

We went for lunch at Ruby Tuesday after the first presentation. This is opposite TGIF. This time I had couple of colleagues with me.

We started with a broccoli and cheese soup which was quite nice. The broccoli was finely shredded so you didn't mind it and the cheese was nice and solid. I enjoyed this and it was good for my throat.

I had a half rack of pork spare ribs. As the menu promised the meat was extremely pliant and tender. 'Fork removable' was the term they used and they were right. The barbecue sauce was on the sweeter side. It reminded me of a teriyaki sauce. It came with a baked potato and sour cream which I didn't care much for.

My colleagues had batter fried shrimp and spaghetti bolougnaise. The dishes looked good and they said that they enjoyed it.

The food was pretty good. Prices (Rs 400 - 600, 10 -15 USD a dish) were similar to TGIF. But the service was less attentive and informed than TGIF and the place was even deader with just two tables occupied on Monday afternoon.

The good food at TGIF and Ruby Tuesday helped reduce the pain of spending the night at Smart Villa and wannabe Gurgaon.

Moonshine said…
I somehow like TGIF better.. maybe its the music..

And of course once we had this party at Ruby Tuesday.. and most of us non veggie ppl came down with a bad case of food poisoning!!! SO that didnt do anything much to improve my opinion either!!!
23 December 2008 at 20:36

Kalyan Karmakar said…
@Moonshine...I am not surprised by your observations. Ruby Tuesday seemed like a funeral parlour compared to TGIF. Low offtake would get freshness into doubt.
My boss was more in favour of TGIF. I wanted to try Ruby as my last two outings were at TGIF
24 December 2008 at 12:30

2 Suggestions next time you r in Ggn:
1. Visit Rock man s Beer Island in Ambience Mall...It has an entire factory set up to make Beer on the spot...Its yummy....

Kalyan Karmakar said…
Hey shomu, good to see you hear after ages. I don't know about 1 or 2. I was in the sleazy Ramsay horror film one. Thanks for the tips. Will be useful especially if there is company. I don't think I ever went back to Gurgaon after that
24 October 2009 at 02:06

Anonymous said…
Ruby Tuesday is crap, I went there on a Sunday afternoon for lunch, and only 1 other table was occupied!
18 February 2010 at 20:31